You don’t see this everyday.

Renowned R&B vocalist Angie Stone was arrested in Georgia Sunday (Mar 27) after the “No More Rain” singer was allegedly caught speeding on a suspended license.

Angie, who according to TMZ was on her way to church, was booked on both the speeding charge and the suspended license charge … and was released an hour later.

Angie’s rep tells TMZ, the singer was completely blindsided by the run-in with cops — because she had no idea there was a warrant out for her arrest.

According to the rep, Angie had a prior speeding ticket which went unpaid because she changed addresses recently … and never got the physical ticket in the mail.

Angie has since paid the ticket and is finishing up all the proper paperwork to tie up any other legal loose ends. 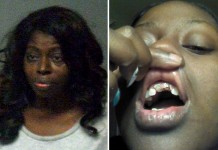 Mugshot Madness: Angie Stone Arrested for Assault After Knocking Her Daughter’s Teeth Out