The media personality’s daughter 45-year-old daughter Alexis became a mother to a baby girl named Jude via a surrogate earlier this week. By the sounds of it, having Stewart as a grandmother may pay off well for the newborn as Alexis announced on her radio show “Whatever with Alexis & Jennifer:”

“She was born at 1 in the morning … and [Martha] brings this huge box from Bergdorf Goodman. I open it up and I look inside, and it’s full of baby clothes, all with embroidery.”

But was Alexis grateful of the effort her mother made?

“I’m like, Wow, I guess I’m going to be allowed to buy myself something pretty nice because all this stuff’s going back! If the kid can’t see it, why the 100 dollar clothes? Only books, child appropriate or whatever: that’s the only thing that I want. No toys, please!”

“Martha is going to be called, ‘Martha,'” Alexis said. “She seemed to have no problem with it. … I was like, ‘Do you really want to be ‘Grandma’?’ I don’t like the term grandma!”

Congrats to Martha and Alexis on the new addition to their family!! 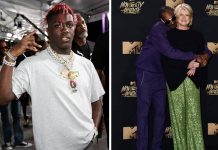 Naomi Campbell, Cameron Diaz, Bar Rafaeli and Others Attend Sirius XM’s Re-Opening of Studio 54 for “One Night Only” in New York City [PHOTOS]