Antoine Dodson has really taken his 15 minutes of fame to the next level and it looks like he isn’t going anywhere any time soon!

The Internet sensation is now coming out with his own reality TV show.

According to TMZ, Dodson is shooting a pilot for the show produced by Entertainment One as we speak.

So far the show doesn’t have a name or a deal with any networks……but a bunch of footage centered around Antoine moving out of Alabama and over to West Hollywood has already been recorded.

Wonder how far this will make it? 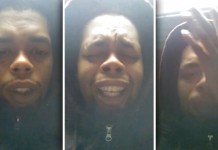 Antoine Dodson Gives Up the Gay for God

Antoine Dodson Defends Chick-fil-A Against Proposed Boycott from Gay Community: “No one is going to stop me from eating there!”