The Feds are investigating new leads in the 1997 murder case of Notorious B.I.G. They say things are starting to heat up!

A task force made up of local and federal law enforcement agencies is actively pursuing leads into the 1997 slaying of hip hop artist Christopher Wallace, better known as Biggie Smalls or Notorious B.I.G., according to two sources familiar with the investigation.

According to one law enforcement source, the investigation into the 13-year-old unsolved case was “reinvigorated” months ago as a result of new information, but the source would not elaborate further because of the ongoing investigation that includes the Los Angeles Police Department, L.A. County District Attorney’s Office and the FBI.

On March 9, 1997, Wallace, 24, was shot and killed while riding in a Suburban that was driving away from a music industry party at the Petersen Automotive Museum in Los Angeles. Los Angeles police said a lone gunman in a Chevy Impala pulled alongside the Suburban and opened fire on Wallace, who was in the passenger seat. Witnesses described the suspect as being an African-American man wearing a suit and bow tie.

The main theory behind shooting was payback in a so-called rap war between East and West Coast hip hop artists and their record companies — Bad Boy Entertainment in New York, which represented Wallace, and Death Row Records, headed by Marion “Suge” Knight, in Los Angeles.

Six months earlier in Las Vegas, a gunman opened fire on a car driven by Knight, killing one of his top artists Tupac Shakur. That murder remains unsolved also. “East Coast was Biggie, West Coast was Tupac,” Wallace’s mother Voletta Wallace told a filmmaker in the 2002 documentary “Biggie and Tupac.”

“Come on now, you’re messing with lives here and that’s exactly what happened. Two lives were lost as a result of what? Stupidity?” Voletta Wallace told the filmmaker. Retired Los Angeles Police Detective Russell Poole, who worked on the Wallace case, told CNN that he believes Knight was behind the murder, even though the Death Row Records’ boss was serving time on a probation violation at the time.

“Suge Knight ordered the hit,” Poole said, adding that he believes it was arranged by Reggie Wright Jr., who headed security for Death Row Records. Reggie Wright Jr. told CNN he had nothing to do with the murder, and Knight has repeatedly said he had nothing to do with the crime. Poole said he retired early from the LAPD, in part, because he was thwarted in following leads in the Wallace case involving police officers, some of whom worked off-duty for Death Row Records.

“I think I was getting too close to the truth,” Poole said. “I think they feared that the truth would be a scandal.” One of the officers Poole said was involved is David Mack, a rogue policeman tied to the LAPD Rampart Scandal, who was sent to prison for robbing a bank in 1997, the same year Wallace was killed.

Poole said Mack owned the same type of car driven by the gunman who shot Wallace, and Poole said a friend of Mack’s resembles a police sketch of the shooter. CNN was unable to reach Mack for comment, but when allegations of his involvement in Wallace’ slaying originally surfaced more than a decade ago, his criminal defense attorney Donald Re called the claims ridiculous.

Poole also assisted Wallace’s family in their wrongful death lawsuit against the Los Angeles Police Department alleging a cover-up in the investigation. Los Angeles City Councilman Bernard Parks was the chief of police when Poole was investigating, and he told CNN the accusations about a police cover-up are “absurd.”

“We would have never ignored a lead that could have helped us solve that murder,” Parks said. Perry Sanders, Voletta Wallace’s attorney, told CNN the family’s lawsuit, which was originally filed in 2002, was put on hold in April after Los Angeles police said turning over evidence from the case would interfere with a beefed up investigation.

Mack was released from federal prison on May 14. 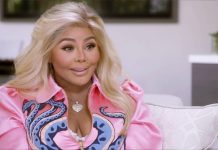 Notorious B.I.G. Tells Lil’ Kim She Was His Soulmate & Reveals 2 People Conspired to Kill Him From Beyond the Grave