Robert De Niro says that his new movie “Little Fockers” highlights situations that are very similar to what a lot of married couples go through in real life……….like dealing with in-laws.

The actor admits that many of the incidents in the movie are loosely based on he and his costars’ own experiences with family and in-laws, and that’s why people love the “Meet the Parents” film series so much.

In a recent interview with Cinemablend.com, De Niro said:

“I would say that’s why people like the film – I hope this one too – because of the story, the situation, the family dynamic, one family meeting another. It’s like going into territory you have to deal with. Part of you is saying, “Why am I here?” But you have to be there. You’re with this other family and you have to deal and I think anybody can relate to that.”

Robert De Niro also talked about how much fun it was re-uniting with the cast for the third go-round.

“We have fun; I enjoyed it a lot,” he said. “When you’re doing comedy I have less restrictions or constrictions. You can either just cut the thing out or the director will say to try something else or that’s not working, it’s too broad or whatever. There’s more room for just having fun in a certain way.” (Source) 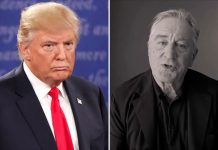