According to E! Online, Zac Efron and Vanessa Hudgens are calling it quits.

A second source also confirmed that the relationship is over…saying that it finally ran it’s course.

“They were together for so long. It just ran its course.”

The two started dating back in 2006 after meeting on the set of the hit Disney movie “High School Musical”. Despite the recent break-up however, one source assures they will remain good friends.

“They are 100 percent still good friends.” 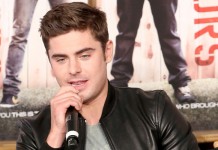