Pink confirmed earlier this week that she and her husband Carey Hart are expecting their first child together!

The Pop singer made the revelation on yesterday’s episode of “The Ellen DeGeneres Show” while promoting her new greatest hits compilation album (in stores now). Pink says she and Carey kept the news a secret for a while because she suffered a previous miscarriage and was initially nervous about going public.

“I’m eating for two these days,” Pink said when Ellen asked her why she was glowing. “I didn’t really want to talk about it because I was just really nervous, and I had a miscarriage before and if I was going to talk about it, it was going to be with you,” Pink told Ellen.

Peep the video footage below! 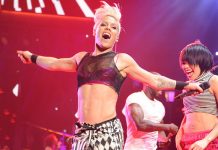