Former rapper Vanilla Ice (real name: Robert Van Winkle) made a pretty big name for himself back in the early 90’s with his chart-topping single “Ice Ice Baby.” And now the 42-year-old entertainer turned reality star (he had a stint on VH1’s “the Surreal Life”) has announced his new TV show “The Vanilla Ice Project,” which will follow him as he renovates a 7,000 square foot home in Florida.

Ice says that even though this may be new to other folks, he’s not new to the game of real estate seeing as he’s been doing it for over a decade:

“I’ve been doing this for over 13 years,” said Winkle. “I was building homes in Florida, from $300,000 to $1.5 million. The bottom dropped out of the real estate market, but I learned how to go to these seminars and read these books — Robert Shemin is one of my favorite authors. He’s a guy that I learned a lot from, by reading his books, about how to adjust to the market as it evolves. One of the adjustments was, O.K., now you can buy a foreclosed, or tax-lien or short-sale home for a lot less than you can build a home.

“Basically, when I had a lot of money when I was younger, I said — like most rock stars who are young and dumb — let me go buy a bunch of houses. So I bought houses in L.A., in Laurel Canyon right next door to Michael J. Fox; on Star Island, next door to Don Johnson and Melanie Griffith; in Utah; and on Bleecker Street in New York City.

Using a real estate tax-lien, Van Winkle was able to purchase the Palm Beach house for $400,000 at short-sell auction and gut renovated it for his new show “The Vanilla Ice Project,” which premieres on the DIY network next month (Oct. 14th) 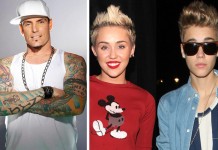 Vanilla Ice Predicts Justin Bieber’s Future: “Something else new will come along … and he’ll be forgotten”