Film director Spike Lee is known for his in-depth, heart-wrenching documentaries and his latest, “If God is Willing and Da Creek Don’t Rise” is no different. “If God is Willing” is about the aftermath of Hurricane Katrina (like his 2006 documentary “When the Levees Broke”) and also focuses on the health, wellness and rebuilding of New Orleans and Louisiana in the 5 year wake of the devastating hurricane. One-half of the 4-hour special aired yesterday (Mon. Aug 23) on HBO with the other half set to air tonight.

Spike Lee recently sat down with Newsweek for a fairly in depth interview about the documentary, how it came about, the state of New Orleans/Louisiana today, and more. Check it below:

Did you plan from the outset to revisit New Orleans sometime after you did When the Levees Broke?
We knew we were going to revisit [it] before we were even finished with When the Levees Broke. We knew the story was not done, not that it’s going to be done any time soon; we wanted to revisit it, and HBO agreed with me. It was just a matter of determining when we would return, and we felt like five was a good number, so we decided to do something that could air just prior to the fifth anniversary.

You’re known first as a director of scripted fare. Have you considered, or would you consider, a scripted project about post-Katrina New Orleans?
Nah, David Simon is already doing that on HBO with Treme. I liked it very much, I’m a big fan of David Simon’s work.

But you do talk to people in the film who held that opinion. Did you find that people who held that theory then still hold it five years later?
If you ask the same people do they think the levees were blown the f–k up, they would say yes. Right now people are just trying to deal with this BP oil.

Given the inclusion of the BP oil spill in the film, how recently did you finish production?
Our last day of shooting was, like, two weeks ago.

How far along in the process were you before you decided the oil spill was necessary to include?
We were done. We were done shooting. And then we had to rethink everything after April 20.

What would constitute a successfully revitalized New Orleans?
Well, I’ll say affordable housing for all. I’d say a great education system. A levee system that is sound. A lot of people have a lot of questions about how safe those levees are, even after Katrina. It’s what you want for any city to prosper.

The new film explores how much of a psychological toll Katrina took on the residents of the city. Obviously things can be rebuilt, but do you think a personal sense of comfort or normalcy will ever return?
Still today, people are dealing with posttraumatic stress, especially kids, and this was five years ago. First of all, you can never feel 100 percent secure, because New Orleans is under sea level, and it’s in the direct path of storms during hurricane season. So it’s just a risk living there. You can only feel so secure because of where it is.

What criteria are you using to decide what the best shots are?
“The best shot” could mean a lot of things. There could be stuff where something is shot poorly or the sound is not great, but it’s the only thing available, so you don’t care that it doesn’t look great. Even with narrative film, there might be a take where the sun came in, but that take featured the best performance. I’m always going to take the performance.

Do you think people still care about Katrina five years later? Or is it all about Haiti now, and it’s like “Katrina’s over”?
Well, it’s not about Haiti now either. Haiti’s over. A couple weeks ago, [former president Bill] Clinton went back, and now we won’t be back to Haiti until a year. Same with this; everyone will go back for the five-year anniversary, but after the 29th, no one will care anymore. I was talking about this with Anderson Cooper, who told me there are times when he wants to stay with a story but he can’t because people aren’t that interested anymore. People get fatigued. That’s where they got that term “Katrina fatigue.”

You weren’t stricken with Katrina fatigue.
No, not me. I was in Venice when it happened, and I was in my hotel room riveted to the television, watching CNN and the BBC. I just couldn’t believe I was watching Americans in the condition they were, standing on their houses, water all around them with signs that said “Help me.” That’s when I knew I wanted to do the first film. 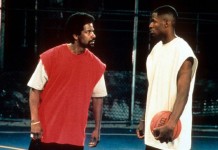 Are Spike Lee and Ray Allen Working On A “He Got Game” Sequel?