Peep a few excerpts from the candid interview below:

BET: Tell us about “The Lottery Ticket.”
Of course it’s about a dude who wins a lottery ticket, but more than that, to me, it’s about how everybody hates on you when you don’t got nothing. Then, you come across love and people are real fake when you get successful. So Bow Wow has to figure out who his real friends are. It’s a funny movie when it gets to that, and it deals with a lot of materialism.

There are some parallels to “Friday,” in a way.
I could see that comparison. When we did the “Friday” movie, we were fans of Cheech and Chong; it was born from Cheech and Chong. Now you got this young director, Erik White, who’s coming along getting his shot. I’m pretty sure he’s a fan of “Friday” and the “Barbershops,” and in this movie, of course, he’s paying homage to those movies.

Just going back to “Friday,” it’s been 15 years. There were rumors of a “Last Friday” coming out; what’s up with that?
I don’t know for sure, but I hope there’ll be another one. I would only do it if Chris Tucker was going to be in it, but as of now he doesn’t want to be in it. Right now it’s just kind of in limbo.

Why doesn’t he want to be in it?
I don’t know exactly why. He never said it; he just said he wanted to do something else.

Are you guys still cool?
Yeah.

There was a lot of buzz about the “I Am the West” album for months but when is it coming out?
It will be out next month, the 28th of September. Go to icecube.com and check it out.

What can people expect?
It’s a West Coast record. It’s like all the West Coast artists from the last 10 years been trying to figure out what kind of record we need to do to—I hate the word get back on top—but just get back in the game. It has been too long and it’s really time for us to do what we do best and that’s what this record is.

Seriously, what are your thoughts on Montana Fishburne’s choice of a career path?
I don’t like it. I feel for Larry Fishburne and it’s just a sad situation. Every father ‘s job is to keep their daughter out of that. But it’s really on her. He didn’t do nothing wrong. She trippin’.

Are you in touch with him at all?
Nah, I see him when I see him.

Any last words about “The Lottery Ticket”?
It’s funny. Anybody looking to come up, go check it out because Bow Wow shows you how to do it. 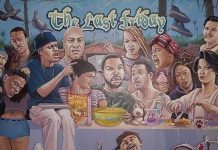 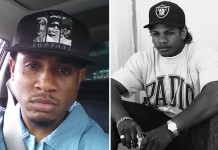