Actor Ryan Reynolds ran into a little trouble on Monday when he was injured on the set of the upcoming action flick “The Green Lantern”.

The former “Proposal” star separated his shoulder while shooting scenes for the DC comic book inspired film, and according to a close source is in lots of pain!

Reynold’s rep has not commented on the situation.

We hope he gets better soon though… Those action movies are something serious!! 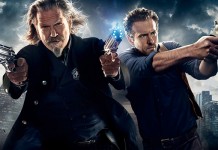