Victoria Beckham was officially made creative design executive at Range Rover last night (Thurs. Jul 1) at the company’s 40th anniversary at London’s Kensington Palace. The 36-year-old pop star said she was “very excited” to be making things a little more posh for the Range Rover brand.

The former Spice Girl‘s first project will be working on Range Rover’s Envoque, which will premiere summer 2011 and is said to be the company’s greenest vehicle yet. She will oversee interior designs and future special editions of the model, which she says is “absolutely stunning.”

“She knows a lot about fashion and a lot about trends, a lot about luxury products. She’s established herself in her own right as a designer and she has some interesting perspectives and she’s…somebody that’s really aware of the luxury goods sector of the market which is really important to us.”

“I don’t know where to start … It’s an incredible opportunity I’ve been given. I’m very excited. I like to take on a challenge and I’m ready for it.”

In 2008, Victoria Beckham launched her own fashion line. Today, the brand includes dresses, denim and eye-wear and it’s known for its sharp tailoring and form-fitting silhouettes. 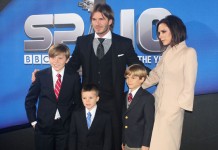