Well…it appears that Lindsay Lohan isn’t the only one catching hell lately!

Momma Dina Lohan ran into a little trouble of her own at an ice cream parlor in Long Island this past Wednesday (Jun 16). She was denied a free Carvel ice cream cake for her son Cody’s 14th birthday when she tried to use Lindsay’s Carvel “Black” card at an East Meadow store.

Lindsay’s Carvel “Black” card was a promotional gift given to the SCRAM bracelet wearing actress and entitles her to free ice cream for 75 years. However the card didn’t come with a plus one so Dina was not only denied an ice cream cake, but the card was also taken away from her. So Dina then took to police to come in and retrieve her daughter’s platinum ice cream card.

“Finally he gave up and gave me my card back. But he told me, ‘You can have the card, but you can’t have the cake! It just shows how we [Lohans] get treated so much worse than regular people.” Dina told press.

Carvel later released a statement on the incident:

“Unfortunately, the Lohan family has been abusing the card. While the card was issued in Lindsay’s name only, her extended family has repeatedly used the card without her present. At first, we graciously honored their requests while explaining that the Black Card was not a carte blanche for unlimited Carvel Ice Cream for the extended Lohan family and friends. After more than six months of numerous and large orders for ice cream, we finally had to cut off the card and take it back. 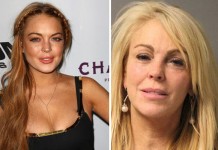