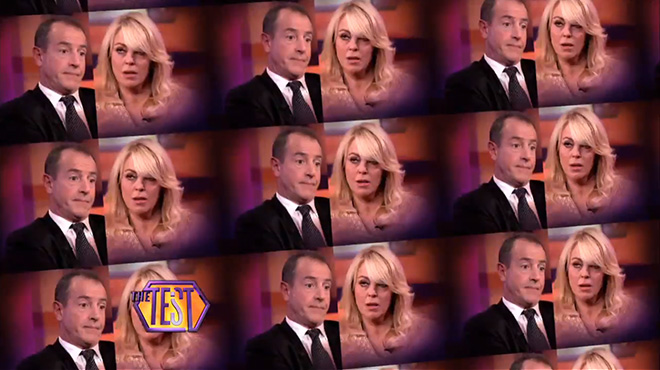 As Lindsay Lohan dedicates her life to rebuilding her career (and nostrils), part of the reason she even fell to addiction — her parents — continue to provide unnecessary amounts of stress to her life by exploiting their private problems in a public space.

It’s amazing that Michael and Dina Lohan didn’t work out. After all, both are attention whores who exploit their children to advance their own fame, and each party comes across as guilty of not being selfless enough to stop complicating their children’s lives by acting a complete ass on national TV.

Enter Michael and Dina’s appearance on a new CBS show called “The Test” this week, in which the two tear each other apart in front of a live audience.

When the show was announced earlier this year, the network described in a press release that “The Test” is “a one-hour conflict resolution talk show that will use lie detector and DNA tests to settle relationship and paternity disputes among the guests.”

Entertainment Tonight screened a preview of Michael and Dina’s episodes, one of which aired on Tuesday night (Sep 11), with the other set to air tonight, and here’s what you can expect of the mess

“I didn’t abuse her every day,” Michael told The Test host comedian Kirk Fox. “She drank every day. She was abusing herself by drinking and doing cocaine. With my daughter.”

Dina was livid at Michael’s accusations, indignantly asking “Do I do cocaine?” to which he replied “Yes.” The mother of four was furious, saying to her ex-husband: “You’re disgusting and a liar!”

Fox told ET that he believes the Lohans “have a genuine hate,” for each other and said “I think what surprised me most is that they ever created life.”

Oprah, adopt Lindsay. Well, wait, you wouldn’t do that. Gayle, you adopt her.

WATCH THE FIRST CLIP UP TOP, AND THE SECOND DOWN BELOW