R&B singer Pleasure P hit up the Ed Lover Morning Show to attempt to clear his image of those nasty child molestation rumors that came out about a week ago. As time goes on, more bullsh*t comes out (for one, the dates on the “documents” are all off) which goes to show that you can’t believe EVERYTHING you hear/read on the internet.

We actually feel pretty bad for running with the original story but you live and you learn. Take everything you hear (no matter WHERE you hear it from) with a grain of salt. Believe half of what you see and none of what you hear.

Anyway, Pleasure P (real name: Marcus Cooper) discussed his 3 Grammy nominations and the effect this crazy story had on his career and his personal life. He and the morning show hosts also discussed who might be behind the the allegations (read: Pretty Ricky!)

On if he believes his former Group Members are behind the rumors
I can’t say that I feel that I do and I can’t say that it ain’t them but we are going to get to the bottom of it. We are investigating it and we will reveal who the perpetrator is real soon.

Lawyer: I don’t like to point fingers publicly, we are above that but I can say that I’m certain I know where these rumors came from. I just can’t talk about it right now because there are legal proceedings going on that that might effect.

Pleasure P: Honestly I don’t want to talk about Pretty Ricky. We don’t have no relationship where I can sit back and talk about Pretty Ricky. I just want to keep it moving and everything on the positive. I have been nominated for three grammys. It’s bee a tough road. These are the things an artist has to go to. It’s a part of me becoming successful. Two successful tours and now I’m nominated for three grammys.

On How The Rumors started:
It actually came from a no-face blogger, a person that don’t exist on the internet. A person who won’t show their face just decided “I’m going to put out some false information about Mr. Pleasure P. We dealing with it right now. I took off the R. Kelly tour just to deal with this issue. It’s a very serious matter and it could happen to anybody. It could happen to you. That a person put something out there like that and people actually believing it”.

On If he has an idea of who is spreading this rumor
It could be person(s), I’m not saying that i really know who it is. We are getting to the bottom of this and that’s why I’m not on tour. I’ve been nominated for three grammys and I haven’t been able to celebrate that. The same day as my nominations came through, I had to deal with this.

On Where He Was When He First Heard About It
I was just getting off the stage or on the bus. People started calling me, then I checked my twitter and people are like “I want to burn your cd” and I’m like “are you serious, for something that’s not even true”. Then I took off the tour and came to New York to deal with it.

On If It could possibly have some truth in the rumor
It’s out of left field. It’s done. it’s something that never happened

On if the names on the documents were actually family members or people he knew:
(Lawyer steps in and speaks). You gotta look at it this way. How do you defend yourself against a lie on the internet. It’s virtually impossible. The only thing that this unnamed person has come forward with are these documents and if you look at them they don’t make sense. They are cobbled together. There are different documents. We don’t know if they are real or not, I think they are phony. I don’t think anyone has really looked at them or read them. They have the name Marcus Cooper on them, they have the name Joseph Smith and Mariah Johnson but they don’t say anything about child molesting. And it wouldn’t make sense for documents that are from a family court, for anyone to be able to publish them because the law requires that these stay sealed for the safety of the minor children. The courts would never in a million years release documents like that and that’s how we know these are phony.

On it being the price of fame
I’m gonna be honest, I told my publicist Sydney “blogs don’t talk about me, I’m not worried about no blogs”. I got what I asked for but not in a positive way. They see me and Bria around all the time together and say “oh now he’s dating her” and it could be a big part of it too. I don’t know..

On how it is effecting him personally
If someone tried you like that and you can’t do nothing about it. I feel real hurt about it. I feel like I never got the chance to enjoy the fact that I got nominated for three grammys. Someone took that moment in my life from me. When I am 50 and I think back “Remember In 2009 when I was nominated for three grammys, I had to deal with…” I will always have to remember this situation as I go through life.

Shout out to Necole Bitchie for doing the hard work for us and transcribing the highlights! Peep the 3 videos of the interview below… 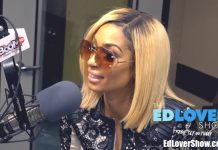