Singer LeAnn Rimes and music producer/TV personality Randy Jackson posed for a pic together on the red carpet of the It’s Y!ou Yahoo! yodel competition at Military Island in New York City’s Time Square earlier today (Oct 13). Other celebs at the event were Ryan Leslie, Pete Wentz and more.

In New York’s Times Square, Yahoo transformed an iconic military recruiting station into a multi-story recording studio, where crowds lined up for a chance to record their interpretation of the Yahoo yodel while their image was projected on a nearby jumbotron alongside a towering Yahoo billboard.

American Idol finalist Kimberly Caldwell hosted the event, while recording artists Jewel, LeAnn Rimes, Randy Jackson and Pete Wentz were on hand, and a house band played from a stage set up over the entrance to the Hard Rock Cafe Restaurant.

For their background music, yodelers can choose their own genre, like rock, bluegrass, hip-hop or funk, or they can select an original background musical track from a list of options provided by Yahoo. 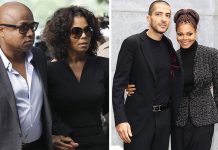