Don’t you just hate when you get a new cell phone number and the original owner of that number has a ton of “phone baggage” (stalkers/bug-a-boos, telemarketers, bill collectors, estranged family members, etc.)? Well imagine if you were Lil Jon and you discovered you had Miley Cyrus‘ old number!

“I was basically in shock, like how did that happen?!” he said in a statement. “Especially when I get texts like ‘CONGRATULATIONS ON TEEN VOGUE!’” Lil Jon told Access that Miley’s friends have been calling him by mistake, but he’s planning on keeping the line.

“I’m gonna keep it cause I don’t answer numbers I don’t know any way!” he said, adding that he’s a fan of the “Hannah Montana” star. “Yeah, I like Miley! My son likes her show!” he said. “I’ll probably run into her at some award show.”

The rapper first announced the phone mishap on his Twitter page last week. “HOW COME I JUS GOT A NEW PHONE NUMBER AND ITS F***** MILEY CIRUS OLD NUMBER!!!” he wrote last Thursday. “STOP CALLIN ME LIL DAMN GIRLS!!!! TRUE STORY!! NO BS!!” 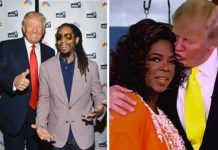