Actor Terrence Howard is featured on the cover of the March 2009 issue of Ebony Magazine.

Standing at 6-foot-1 with a lean stature of 180 pounds, Terrence Howard is not afraid to speak his mind. It is for that reason that fans won’t see the soon to be 40-year-old in Iron Man 2. Howard said after talking with his close friend and career adviser, Will Smith, he decided to opt out of the film. “I was simply on the wrong path with that movie,” he said. (p. 62) 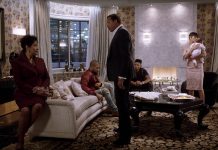 Empire Season 3 Episode 7: Does It Come on TV Tonight?