It has been reported that Warner Brothers Films will be creating a motion picture covering the life of late singer and actress Aaliyah Haughton, who died in a plane crash in August 2001 following a video shoot in the Bahamas. Bill Condon, best known for directing “DreamGirls” will be directing the currently untitled biopic, which will star Keisha Chante who will play Aaliyah.

“We are going to great extremities to make this movie perfect. We have Chante in extensive training, studying, speaking with family members, watching personal footage and in choreography training with Aaliyah’s choreographer and dear friend Fatima Robinson. This movie will be seamless the same way it was for Selena fans who enjoyed Jennifer Lopez. I can promise Aaliyah fans that this movie will be ten notches higher.”

A source close to the production of the film says the script will pull no punches and will go as far as touching on the subject of Aaliyah’s highly publicized marriage and annulment to producer/singer R. Kelly. She was only 15 years old, while he was 26.

Canadian singer Keshia Chante wants Aaliyah’s fans to proud of the outcome of the film and doesn’t want to dissapoint.

“Aaliyah inspired me and an entire generation. She was stunning, effortless and was capable of so many things. This is a hard undertaking, I have big shoes to fill but I am committed, determined and will train to the very end to master this role. I want Aaliyah’s fans and admirers to be proud of this film and feel like it was the best interpretation possible of our babygirl. I refuse to disappoint.”

It has also been confirmed that Aaliyah’s closest colleagues will be featured in the film, including her choreographer Fatima Robinson, producers and friends Timbaland, Missy Elliott, Ginuwine, even world renowned music video director Hype Williams will be apart of the film and will help re-create the “Rock The Boat” video set which was the last video Aaliyah ever shot. The movie is tentative to start production end of March and is rumored to have a production budget of over 80 million dollars. 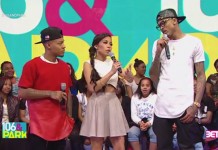