Fashion designer Kimora Lee Simmons wants her ex-husband, Phat Farm CEO Russell Simmons, to pay up! To the tune of $40,000 per month, that is. In documents filed Tuesday, which were obtained by TMZ in L.A. Superior Court, KLS is demanding a whopping $20k per month in child support, per child, up until the year 2019 (for Ming Lee) and 2022 (for Aoki Lee). That’s $6 million total over the next 14 years, for all of you math wizzes out there.

I’ve always thought Kimora was money hungry, but damn … this takes the cake! She’s already rich as hell off her Baby Phat empire, and now she’s trying to cash in on being a baby mama. I’m all for child support, but when the mother is already making a more than comfortable living, the father shouldn’t be obligated to pay THAT much. $40,000 a month? That’s nuts! 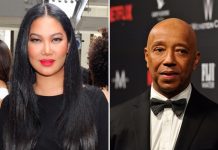 Kimora Lee Simmons Defends Russell Simmons As 6th Woman Accuses Him of Rape: “These Allegations Against Him Are Nothing Like the Person I Have...