Will Smith considers himself to be a “student of world religion,” which is a pretentious way of saying you don’t have a declared dogma that you cling to. Or perhaps, as some have speculated, it’s his way of covering the fact that he is involved with the Church of Scientology.

Though Smith has long denied this, he and his wife Jada do have ties to the faith — including using his old home to help fund a private school that uses teaching methods developed by Scientologists.

Now, there’s a new blog post that notices that many of the themes found in his new film, After Earth, incorporates much of the beliefs of L. Ron Hubbard, the sci-fi writer who founded the Church of Scientology.

In the end, it doesn’t really matter — but it’s hard to dismiss Smith’s ties to L Ron Hubbard’s sci-fi-inspired belief system when its ideas are all over his new film, After Earth.

I won’t get too spoilery here, but consider this:

In After Earth, Smith’s character Cypher Raige (ha!) is a commander in a human society that fled Earth 1,000 years ago. They escaped their ecologically-ravaged homeworld to a new planet that was picture perfect… minus a race of blind aliens with a thirst for the pheromones produced by fear. Convenient! What makes Cypher special is that he’s capable of “ghosting,” the ability to abandon fear and become invisible to the aliens. As we’ve seen in the trailers, circumstances eventually take Cypher and his son Kitai (Jaden Smith) back to Earth with company — a fear-hungry alien. Kitai ends up having to cross the terrifying forest land of Earth and his biggest problem is that he’s a total pussy. He is bubbling over with fear. He’s too fucking emotional and that makes him a huge target for the alien.

This struck me as Scientology 101. Cypher spends most of the movie guiding his son through the dangerous environments of evolved Earth, coaching him to drop his emotions and believe in his self. Fear is imaginary, a construct of the mind that can be abolished if you believe in your own abilities. To me, After Earth is all about cleansing the body’s “thetan,” or soul. If Kitai can leave behind the physical dangers of the world and invest in self-determinism, he’ll be triumphant. He’ll be a hero because he’s entitled to be one.

Scientology is all about personal survival — the “first dynamic”— and that’s the key to Katai’s mission. Washing away the past, any bad decision he’s made, in order to come out on top. It’s the way his father has lived and it’s basically gone unpunished, even when he has massive mistakes on his record to show for it. Unlike many Hollywood science fiction movie’s, After Earth has an emphasis on self that I don’t believe is coincidence.

You can read the rest of the post here. 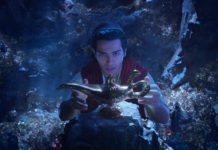