Rick Ross was involved in an apparent drive-by shooting in Fort Lauderdale, Florida early this morning that resulted in him crashing his Rolls Royce into an apartment building, according to reports.

Fortunately, Ross, who was driving the car, wasn’t shot or injured during the incident, nor was the unidentified woman who was riding in the passenger seat of the vehicle. Local news stations reported that “dozens” of shots were fired at Ross’ vehicle at around 5 a.m. Though several buildings in the area were struck by bullets, none of them hit Ross’ car.

Police say another vehicle pulled up beside Ross’ Rolls Royce, and someone inside proceeded to shoot at Ross, who sped off and crashed into a building shortly afterward as he successfully dodged the gunfire.

Cops have yet to make any arrests in connection with the shooting, and they haven’t identified any suspects. According to witnesses, at least a dozen or more gunshots were fired. Ross’ 37th birthday is today, and he was reportedly leaving a birthday dinner nearby, when the shooting happened. He was also spotted partying earlier in the night at LIV nightclub in Miami.

Leaving a drive-by shooting and subsequent car crash unscathed is one hell of a birthday present, no? 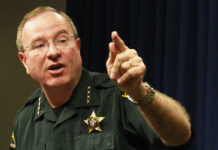