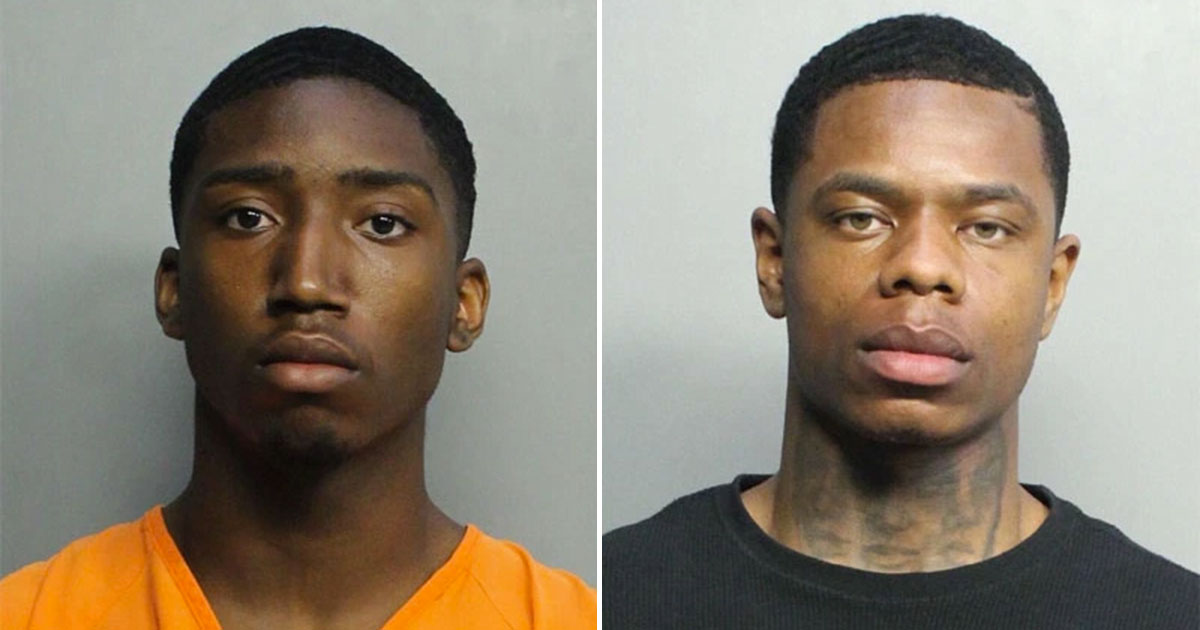 Two North Carolina men visiting Miami for Spring Break were arrested after they allegedly drugged and raped a 24-year-old woman who later died in her hotel room, police said.

The men, 21-year-old Evoire Collier and 24-year-old Dorian Taylor (both of Greensboro) are also accused of stealing the woman’s credit cards and partying on her dime after they left her for dead.

A cause of death hasn’t been determined as the Miami-Dade Medical Examiner’s Office are still conducting tests.

Investigators are reportedly trying to figure out if the woman died of an overdose after taking a pill Collier and Taylor gave her.

More via The Miami Herald:

According to a Miami Beach arrest report, this is what happened:

Paramedics and officers were called to the hotel after the woman was discovered “semi nude” and dead in the room’s bed on Thursday. Detectives immediately obtained video surveillance footage of two men entering with the woman, and then leaving less than one hour later.

Collier fit the description of one of the men, and was found Saturday on Ocean Drive at Eight Street — an area that been jam-packed with partiers in recent weeks. He was wearing the same pants seen in the video, according to the report.

He confessed to police that he and Taylor met the woman at a local restaurant. Collier claimed that Taylor gave the girl a “green pill” as they walked on Ocean Drive. It was unclear from the arrest report whether she took the pill willingly, or if she was given it surreptitiously.

Collier told police that he believed the drug was Percocet, a powerful pain reliever, a Miami Beach detective testified during Monday’s bond hearing.

“Obviously, we sent it to the lab,” Miami Beach Detective Luis Alsina told the judge. “We don’t know if it was fentanyl or some other narcotic.”

Collier said “that he went along with [Taylor] as they planned to have sex with the victim,” according to the report.

Walking into the hotel, the detective testified, the woman was staggering enough that Taylor had to hold her up as they walked into the elevator. “The defendant was holding her from behind, holding her by the neck so she could stand,” Alsina said.

At the hotel, Collier claimed, they each had sex with the woman, and at one point, Taylor forced himself on her as she appeared to be unconscious, the report said.

“The fact that the victim was under the influence of alcohol and narcotics, she could not have consented to sex with the defendants,” according to the police report.

When it became clear the woman was unconscious, the men stole cash, credit cards and her phone and left her in the room “without any concern for her welfare or safety.”

The men used the stolen credit cards as “various locations” in Miami Beach, according to the report. Police said Taylor was captured on video surveillance using the woman’s credit card at South Beach Liquors. When he was arrested, police found the woman’s phone and green pills, the report said.

The two men are facing charges of burglary with battery, sexual battery, petty theft and the fraudulent use of a credit card. If the drug they gave to the woman is found to be a factor in her death, they could face charges of manslaughter or murder.

The arrests come as Miami Beach police and city officials struggle to deal with the massive Spring Break crowds, enacting an 8 p.m. curfew over the weekend in an effort to keep rowdy revelers off the streets.

South Beach has seen brawls, crowd stampedes, and police confrontations involving the use of pepper balls in recent weeks.