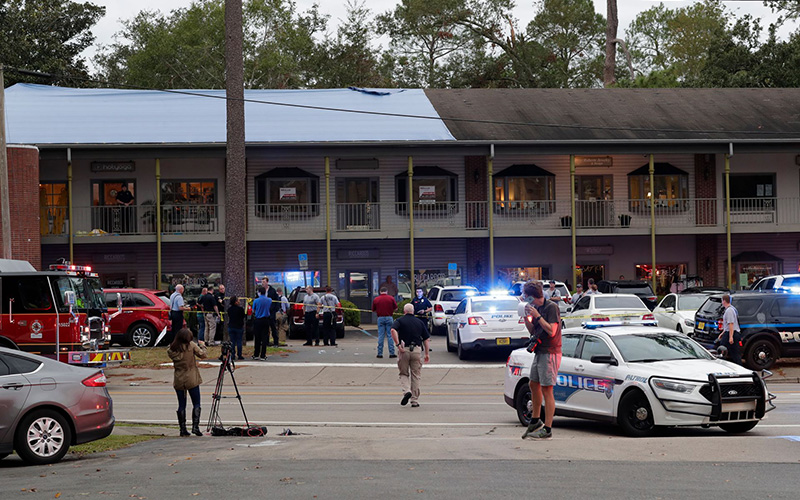 Police say at least two people are dead and at least six others were wounded after a gunman open fired Friday (Nov. 2) at a yoga studio in Tallahassee, Florida.

Police reportedly received a call around 5:37 p.m. of a shooting at the Hot Yoga Tallahassee studio and found multiple gunshot victims when they arrived at the small shopping center where the yoga studio is located.

The gunman killed one person and wounded four others before he shot and killed himself, police said.

Police Chief Michael DeLeo told reporters that the six wounded were being treated at local hospitals.

One person was in critical condition, three were serious and two were in good condition, according to Danielle Buchanan, spokeswoman for Tallahassee Memorial HealthCare.

“The suspect is deceased and one victim has passed away at the hospital,” DeLeo said.

The Tallahassee Democrat reported that Alex Redding, a customer at a nearby bar, said several people came inside seeking assistance, saying a tall man with a beard had been acting strangely inside the Hot Yoga Studio and then began shooting during a class.

Redding said a man with blood on his head told patrons at the bar he tried to stop the shooter, but he was pistol-whipped before the shooter turned the gun on himself.

Authorities believe the gunman acted alone and there wasn’t an immediate threat to the Tallahassee community. Officials didn’t give a motive for the attack or any details about the shooter.

“All evidence points to a single actor who has stayed on scene and is deceased at this time so there is no additional threat to the public,” DeLeo said. A source said there were 11 people signed up for the 5:30 p.m. hot yoga flow class and one canceled earlier in the day. The class instructor was reportedly uninjured in the shooting.

Tallahassee Mayor Andrew Gillum, the Democratic nominee for state governor, said he stopped campaigning to return to the city.

“I’m deeply appreciative of law enforcement’s quick response to the shooting at the yoga facility in Tallahassee today,” Gillum tweeted. “No act of gun violence is acceptable. I’m in close communication with law enforcement officials and will be returning to Tallahassee tonight.”

Megan Nixon was eating downstairs at Riccardo’s Restaurant when she heard something going on upstairs. “We heard pop, pop, pop. It sounded intense. It didn’t sound like gunshots,” she said.

About 30 seconds later, Nixon said she saw two young women run into a bar next door, then she saw a man, covered in blood, run in.

Nixon said the restaurant’s owner locked the door to protect those inside. She said she didn’t understand the events that interrupted what was supposed to be a family night out.

City Commissioner Scott Maddox was among the officials who immediately rushed to the scene of the shooting. “In my public service career, I have had to be on some bad scenes. This is the worst. Please pray,” he posted on Facebook.