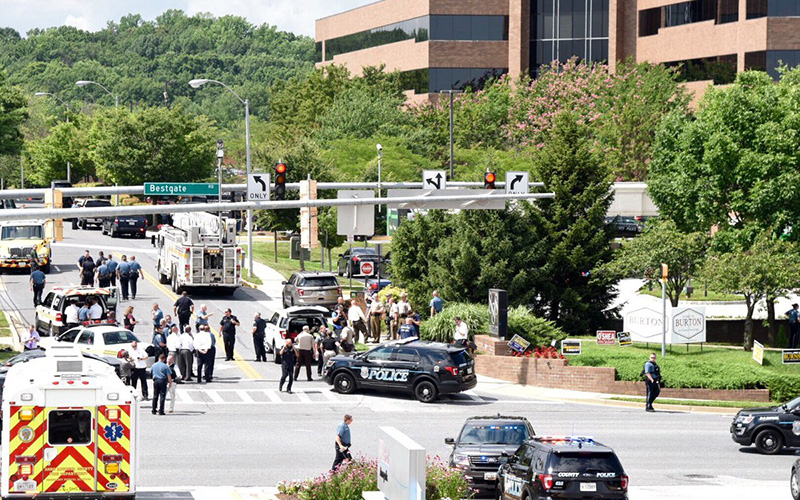 Multiple people have been shot and killed following a mass shooting Thursday afternoon (Jun. 28) at the headquarters of Maryland’s Capital Gazette newspaper, and the suspected gunman is currently in custody.

According to CBS News, at least five people are dead and several others were injured. Gazette reporter Phil Davis confirmed that multiple people had been shot. Davis, who covers courts and crimes for the paper, tweeted, “A single shooter shot multiple people at my office, some of whom are dead.”

He added, “Gunman shot through the glass door to the office and opened fire on multiple employees. Can’t say much more and don’t want to declare anyone dead, but it’s bad … There is nothing more terrifying than hearing multiple people get shot while you’re under your desk and then hear the gunman reload.”

Davis said he was waiting to be interviewed by police.

A single shooter shot multiple people at my office, some of whom are dead.

Gunman shot through the glass door to the office and opened fire on multiple employees. Can't say much more and don't want to declare anyone dead, but it's bad.

I'm currently waiting to be interviewed by police, so I'm safe and no longer at the office.

John McNamara, who has worked for the Gazette and is the editor of the Bowie Blad-News and the Crofton-West County Gazette, has been confirmed as one of the shooting victims. He was in critical condition when he was rushed to the hospital, where he later died.

Joshua McKerrow, a photojournalist for the Baltimore Sun and the Capital Gazette tweeted along with photos from the scene: “Massive police response to shooting in my newsroom in Annapolis.”

Massive police response to shooting in my newsroom in Annapolis. @capgaznews pic.twitter.com/M1Bjwa0mMh

An intern with the Capital Gazette, Anthony Messenger, tweeted that there was an “active shooter” and to “please help us” at around 2:40 p.m. Thursday.

Police responded to reports of an active shooter just before 3 p.m. and several vehicles could be seen heading toward the building, according to news reporters and witnesses. People could be seen exiting the building with their hands up.

Something is happening in Crownsville or Annapolis. We were just passed on i-97 by a dozen public safety vehicles including two SWAT looking ones with sirens going as fast as they could. Somewhere. #maryland #wtop #fox45 #annapolis pic.twitter.com/6cnA1YSCv3

Watch Live: Chopper footage shows a number of people walking with their hands up after reports of active shooter at Maryland newspaper building: https://t.co/1PI6pnGsQa pic.twitter.com/sqcHYIjOUi

Roads near the shooting were shut down and people have been told to avoid the area.

WJLA-TV reporter Brad Bell said that the suspect, who was reportedly taken into custody alive, is believed to have used a shotgun in the shooting.

UPDATE: @ABC7Brad reporting that according to sources, a shotgun was involved and a suspect is in custody in Annapolis shooting.

The Capital Gazette has been published since 1884 and is a daily newspaper that serves the city of Annapolis Maryland. Its sister newspaper, the Maryland Gazette, which was founded in 1727, is one of the oldest American newspapers.

The Capital Gazette building is home to several publications, including The Capital newspaper, the Maryland Gazette, the Bowie Blade-News, the Crofton-West County Gazette and Capital Style Magazine, along with CapitalGazette.com. Other businesses, including a medical office, are also located in the building.

The Capital Gazette and the Maryland Gazette are both owned by the Baltimore Sun Media Group, which is owned by Tribune Publishing. Police have also responded to check the Baltimore Sun newsrooms as a precautionary measure in the wake of the shooting.