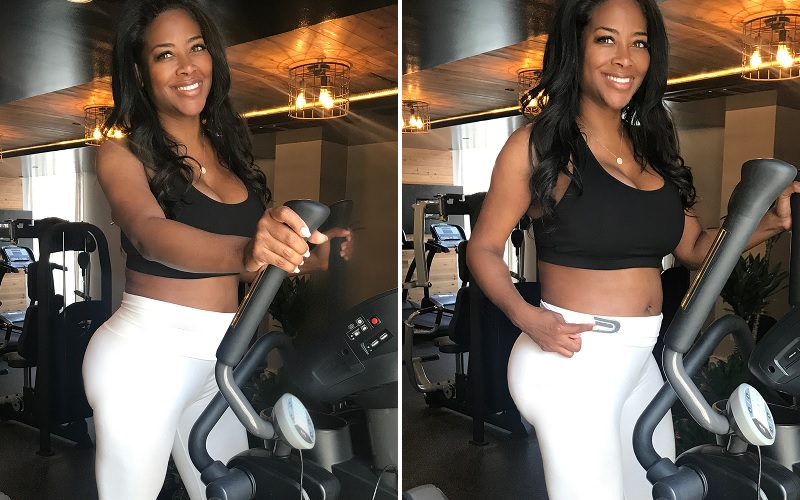 Kenya Moore is still trying to prove to ya’ll that she’s pregnant. Amid continued speculation she’s faking her pregnancy, the Real Housewives of Atlanta star has posted another photo showing off her tiny baby bump.

In a sponsored Instagram post for exercise pants, Kenya gave her followers a glimpse of her growing bump uncovered and in all its glory. “Trying to stay fit for baby,” she wrote in the post last week.

Kenya first debuted her baby bump earlier this month, but people still questioned whether she was faking the pregnancy for an RHOA storyline or if she was really using a surrogate. I guess with all the rumors swirling, she then felt “compelled” to share a video of an ultrasound when she first heard the baby’s heartbeat.

This will be the first child for the 49-year-old, who married Marc Daly last year. She announced her pregnancy while taping the RHOA reunion in mid-March and made it clear that she was NOT using a surrogate. Andy Cohen has also confirmed that Kenya is in fact pregnant.

Kenya’s also facing rumors that she’s lost her RHOA peach. Some reports suggest she was demoted to “friend” and replaced by Eva Marcille, who made her Atlanta debut last season.

Producers were reportedly upset with Kenya for not informing them of her secret wedding to Daly last year. She then refused to shoot any scenes with her husband for the show and was penalized by producers. However, Daly eventually appeared briefly in one episode towards the end of the season.

Kenya’s future with RHOA was still in limbo when filming wrapped. It seems her pregnancy is what saved her, even if it’s only “friend” status.

The official cast for The Real Housewives of Atlanta season 11 has not been confirmed, though filming should begin in the coming months, if not, weeks.