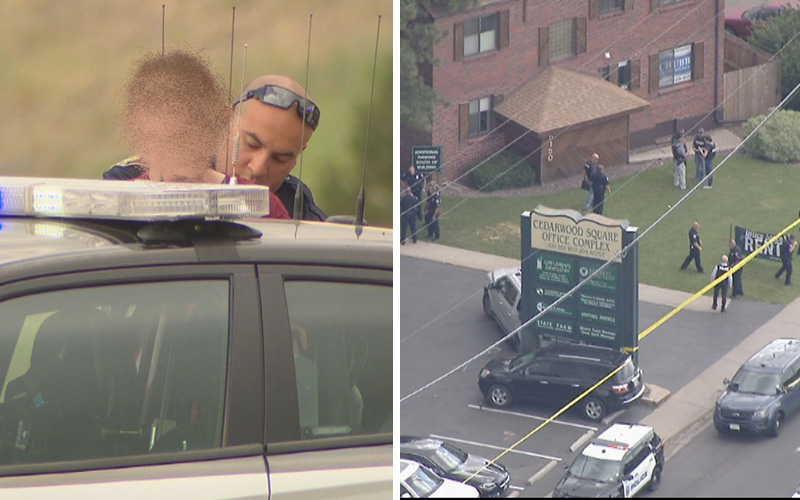 A 23-year-old man was arrested on murder charges in connection with a deadly shooting Thursday (Jun. 14) in Westminster, Colorado.

Police have identified the accused shooter as Jeremy John Webster—who reportedly shot four people, including two children (one died), in the parking lot outside of a Westminster, Colorado dentist’s office. According to police, road rage is believed to have been the motive for the shooting, which left a child dead.

Police said that the suspect didn’t know any of the victims, whose names have not yet been released.

“Through our investigation we have been able to determine the suspect did not know any of the victims and did not have a relationship with any of them. It appears as if this incident stemmed from a road rage,” wrote police.

Of the four victims, three were a mother and her two juvenile sons, one of which was killed.

Here’s what you need to know about Jeremy John Webster and the deadly shooting:

1The mass shooting happened outside a dental office in Westminster, Colorado.

Thursday’s shooting in Westminster, Colorado is the latest mass shooting to traumatize the United States. The first reports of the incident said that an active shooter was near a dental office, and the suspect was still at large for several hours.

Initial reports stated that the shooting occurred inside a dental office, but that later proved untrue. The shooting happened in the parking lot outside Comfort Dental at 80th and Sheridan.

23-year-old Jeremy John Webmaster from Colorado Springs was first identified as the shooter by CBS Denver the Friday morning after the shooting. Webster was arrested after a wildlife officer spotted his car, which was described by police as a black 4-door Toyota Corolla with a Colorado license plate (NPQ-091).

“A wildlife officer followed his car south on I-25 and he was eventually stopped near Castle Rock and taken into custody,” tweeted CBS4 reporter Brian Maas.

Children’s Dentistry of Westminster posted a statement on Facebook:

“We want to thank everyone in the community for the outpouring of support we received after the tragic and senseless incident that occurred today. We ask that you keep the victims in your thoughts and prayers. We would like to give a special thanks to the Westminster fire and police department who responded quickly and immediately took action. We are truly thankful for their efforts today. All Children’s Dentistry staff are now home and safe. Our office will be closed until Monday, June 18.”

2Jeremy Webster shot four people, including two children, one of whom died. The mother and brother of the child who died are in critical condition.

Jeremy Webster opened fire on four people, including two children, one of whom died as a result of the shooting.

Of the four victims, three were a 41-year-old mother and her two sons, a 13-year-old and an 8-year-old. The 13-year-old is the one who died. The mother and her surviving son (the 8-year-old) are in critical condition, and it is believed that the fourth shooting victim, an adult male not related to the other three victims, will also survive.

A heartbreaking scene occurred outside the dental office where the child was killed. A little girl wanted to bring flowers for the boy who died, and she and her grandfather “prayed in the parking lot,” according to Denver Post reporter Elizabeth Hernandez.

Just saw a scene that brought me to tears. Brandy Navarette lives near the shooting. His 6-y/o granddaughter Lilly Diaz wanted to bring flowers for the little boy that died, she said. They brought flowers, a rosary & prayed in the parking lot. She asked me why he had to die. pic.twitter.com/glE2VoFSIt

“When officers arrived on the scene, they found two adults and two children, suffering from gunshot wounds,” police said in the news release. “All four victims were shot in the parking lot of the business complex. There were no additional victims in any of the businesses.”

“An adult male who was shot is expected to survive his injuries. There is no relation between this victim and the below-listed victims,” police said. “An adult female and her two male children were also struck by gunfire. The female and one of the children sustained life-threatening injuries and are in critical condition. A juvenile male succumbed to his injuries.”

The Westminster Police Department said they are also not releasing the identity of the victims at this time.

3 There were reportedly 20 witnesses to the shooting, including a third uninjured son of the mother who was shot.

Police first indicated that they weren’t sure what the motive was for the crime, but they later revealed that they believed that a road rage incident drove the mayhem. They haven’t provided any additional details yet.

Police released a description of the suspect’s vehicle early on, writing on Twitter, “Vehicle of Interest: Black Toyota 4 door” with a Colorado license plate “NPQ 091.” Police added: “occupant(s) should be considered armed. Call 911 or WPD with info 303 658 4360.”

According to the Denver Post, at least 20 people witnessed the shooting. One witness told The Post he “found a man suffering from multiple gunshot wounds and his clothes saturated in blood,” The man was “very coherent” and “very calm,” the witness said.

A lot of police focus on the silver SUV — does appear there are some gunshots on the outside of the SUV on the scene of a shooting outside a Westminster CO dentist office: https://t.co/p7HtB00TqZ pic.twitter.com/V1PCptnTig

After Contact7 investigator Jace Larson obtained a search warrant in the case that provided more details into the shooting, it was revealed that Webster allegedly used a Glock 19 handgun in the shooting, and one of the mother’s sons (who was not injured in the shooting) described to police what happened, saying that his mom “had some sort of altercation near the intersection of Sheridan Blvd. and Turnpike Drive.”

The uninjured boy allegedly told police that Webster followed his mother’s car into the parking lot of the office building where the shootings happened and parked behind her car. A total of three children were in the car—two of them were shot; one of the two who were shot died.

The woman snapped a photo of Webster’s license plate and then exited the car with her children, and then an argument ensued, reported DenverChannel.com. As Webster and the woman argued, witnesses saw Webster pull out a handgun and shoot the woman “multiple times,” according to the warrant.

The woman fell to the ground, and Webster then turned to two of the boys and shot them both multiple times, the warrant said. As Webster started to walk back toward his car, he turned around and shot one of the boys again as he was lying on the ground. The third child was able to run away from the scene without being shot.

After shooting the woman and her sons, Webster made eye contact with a man in a different vehicle—a pickup truck—with his daughter. As Webster walked toward the man’s truck, he shot at it multiple times, hitting the man in both arms. He was able to reverse his truck and drive out of the parking lot. His daughter was not injured.

The woman’s 12-year-old son, who wasn’t injured in the shooting, was able to describe to police about the road rage incident and about the photo his mother took of the suspect’s license plate, which allowed officers to be able to track the vehicle to Webster, who was later apprehended on I-25 near Castle Rock.

9 News reporter Katie Eastman said she spoke with the owner of a car shop near the dentist office where the shooting occurred. The shop owner said he heard around seven or eight “deliberate” gunshots and watched as a man ran down the sidewalk of Sheridan. The shop owner said he saw police running after the man when they arrived on the scene.

Spoke with the owner of a car shop near the dentist office who says he heard 7 or 8 “deliberate” gun shots and watched as a man ran down the sidewalk of Sheridan. He says police ran after him when they arrived #9News https://t.co/bSj6n9RpLg

James Sisneros told 9 News that his daughter was locked inside the dentist’s office near where the shooting occurred while police investigated. He said he saw one of the bleeding victims and it “didn’t look very good.”

4Jeremy Webster told police he suffers from mental illness and was on a new medication at the time of the shooting.

The person of interest was just handcuffed and taken into a Westminster police car. We are not showing a photo of him at this point to respect @WestminsterPD wishes. #9News pic.twitter.com/uvjVYBeZ1Z

Jeremy Webster reportedly waived his Miranda rights and admitted to the shooting. He also told police that he suffers from “mental health issues” and had “just started a new prescribed medication” the day of the shooting.

Webster told police that his new medication and the box for the handgun were at his house. The claims about his mental state and medication haven’t yet been independently verified beyond what the affidavit states.