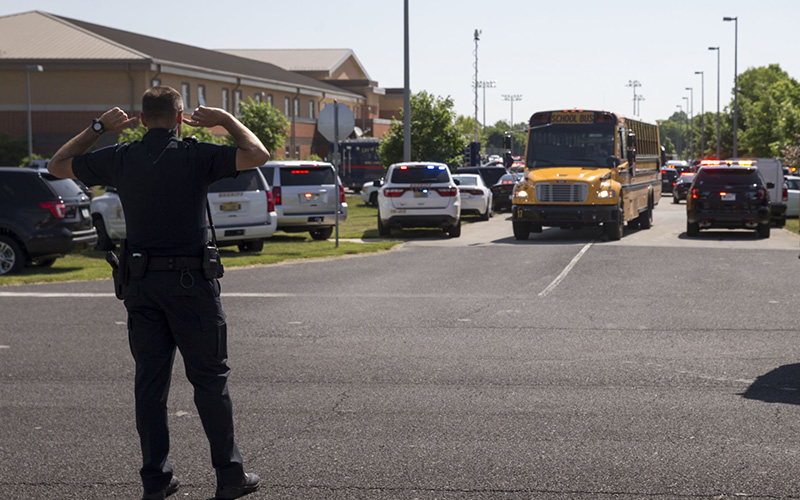 Police in Noblesville, Indiana have confirmed that a shooting at Noblesville Middle School has left two people—a teacher and a student—injured. The suspected gunman, a male student at the school, has been detained in connection with the shooting and is believed to have acted alone, police said. The identity and age of the shooter were not immediately released and a motive is unknown at this time.

Authorities said in a press conference that the first call reporting an active shooter situation came it at around 9:06 a.m. and officers responded immediately. One of the victims is an adult teacher and the other is a juvenile student, officials confirmed. Authorities also said that there was a “secondary threat” made at Noblesville High School and they have dispatched officers there as a precaution.

Police confirm two victims in school shooting at Noblesville West Middle School, a student and teacher. Male student in custody. Police presence at high school after another threat, as a precaution.

According to CBS4 WTTV-TV, Fox59 evening news anchor Dan Spehler shared with reporters a firsthand account from a seventh grader who was in the Noblesville West Middle School classroom where the shooting occurred.

The seventh grader said a student walked into a science classroom and shot at someone. The science teacher immediately sprung into action by bravely tackling the gunman and swatting the gun away from him, possibly saving others from being injured. The student didn’t say whether or not the hero teacher was injured.

“I literally just spoke with a seventh grader who was in the room where this happened. Her mom came to pick her up this morning. She confirmed what I heard from another person who lives nearby that this was in a science classroom and that a science teacher may have been the one to literally tackle this kid and swat the gun away from him,” Spehler said.

“That is a firsthand account… She described him as a student, and that he shot at someone in the room, and one student was injured. And that this science teacher bravely swatted that gun away from the gunman’s hands, saving everyone else in that room.”

CBS4 WTTV-TV reported that Noblesville Middle was placed on lockdown immediately after the shooting and students were taken to nearby Noblesville High School to be picked up by their parents.

The two shooting victims—a juvenile student and an adult teacher—were taken to area hospitals. IU Health officials said the adult was being treated at Methodist Hospital while the teen was being treated at Riley Riley Hospital for Children. Officials didn’t have any information about the victims’ conditions.

It hasn’t been confirmed whether or not the science teacher who tackled the gunman was the one who was taken to the hospital.

Watch a live video stream of the scene at the middle school here.

Today’s shooting at Noblesville Middle marks the 23rd school shooting in the U.S. this year. Just one week ago, a 17-year-old student opened fire at Santa Fe High School in Texas, killing 10 and injuring several others.