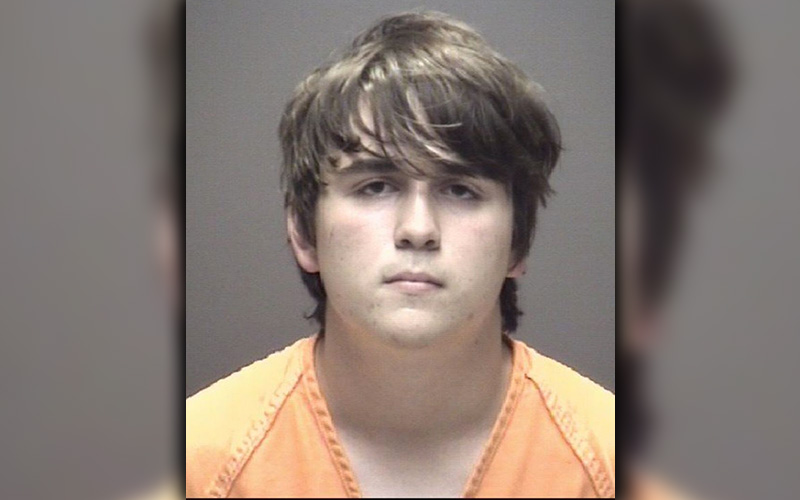 17-year-old Dimitrios Pagourtzis has been identified as the suspect from the Santa Fe High School shooting that left at least 10 people dead and 12 injured Friday (May 18).

Initial reports stated that eight people were killed, however, that number eventually rose to 10, with officials saying that nine students and one adult were among the fatalities.

According to CNN, a second possible suspect, an 18-year-old who police called a “person of interest,” was detained at the scene in relation to the shooting and is being investigated as a possible accomplice. His or her name hasn’t been released.

Here’s what you need to know about Dimitrios Pagourtzis and the Santa Fe High School shooting:

According to a Fox 26 reporter, a student said that Dimitrios Pagourtzis shouted “surprise!” as he burst into a first-period art class and started shooting.

At least 10 people—nine students and one teacher—were killed in the shooting. Some reports note 12 people were injured, while others say 10 were injured.

A female student at the school described the confusion she felt even after hearing the gunshots. “I was sitting in my classroom and I heard really loud booms,” she said. “I didn’t know what they were at first and then I realized what they were when I heard screaming.”

Authorities said a substitute teacher pulled a fire alarm when he realized what was going on in an effort to alert others of the dire situation at the large campus. Aerial footage from the scene showed students lining up outside the school and emptying their backpacks.

A sophomore described the situation as “chaos” once the fire alarm sounded and people found out there was an active shooter on campus. 16-year-old John Robinson said he was in his first period English class when he heard the fire alarm go off.

“Everybody was just trying to get away from the school. They kept saying there was a shooter, people were shot,” Robinson told KHOU 11 News. He said he felt scared and simply wanted to get as far away as possible from the school.

2Pagourtzis was reportedly armed with a sawed-off shotgun, a .38 revolver and was also allegedly carrying pipe bombs, which were found at the school and off campus.

Initial reports about the shooting indicated Pagourtzis was armed with a sawed-off shotgun, a .38 revolver and was also carrying pipe bombs. Witnesses have said they saw Pagourtzis, who was wearing a trench coat in 90-degree weather, with a duffel bag. Lt. Gov. Dan Patrick said a news conference Friday afternoon that the shooting suspect was hiding a shotgun underneath his trench coat.

Police said explosive devices (pipe bombs and pressure-cooker bombs) were found both inside and around the school building, which is located about 30 miles southeast of Houston.

#BREAKING::: second scene along Hwy 6, about two miles from the school. Authorities say they’re investigating the possibility of explosive devices inside a mobile home. pic.twitter.com/P7ktSzLxHq

Officers also searched property related to the suspect for bombs, according to reports, including a trailer in Alvin, Texas about three miles from the school belonging to Pagourtzis’ mother. Police also reportedly searched a second home about four miles away from the school.

3Dimitrios Pagourtzis posted a photo of a t-shirt with the words “BORN TO KILL” written across it and a jacket with Nazi symbols on Facebook.

On April 30, Dimitrios Pagourtzis shared a photo on Facebook of a t-shirt with the words “BORN TO KILL” in all caps written across it. According to a CW39 report, witnesses who described the suspect as “quiet” and “kept to himself” saw him wearing that same “Born to Kill” shirt and “army boots.”

According to Pagourtzis’ now-deleted Facebook page, he is an 11th grade student at Santa Fe High School. That page was also a source of promotion for a YouTube channel which he posted to under the pseudonym “Comma Kazi.” The channel, which has 240 subscribers, features three uploaded videos of various rap songs, with the last update posted in 2013.

Another photo posted on Pagourtzis’ Facebook page showed a jacket with icons including Nazi symbols. He described the medals attached to the jacket, including the “Iron Cross,” which he said stands for bravery.

Pagourtzis’ classmates told NBC News that he wore a trenchcoat to school every day, even if it was hot.

17-year-old Dustin Severin told KPRC-TV he saw Pagourtzis in the hallway before the shooting wearing what he described as his “usual outfit.” Pagourtzis told the news station, “He wears a trench coat every day, and it’s like 90 degrees out here.”

Pagourtzis once played for the Santa Fe JV football team, and in October 2016, was noted as playing “a huge role” in a 14-0 victory for the team. Ray Montemayor III, a teammate of Pagourtzis’ told the Daily Beast, “I played football with him for three years. People on the news said he was bullied a lot. I never seen him being bullied. I never bullied him. He was cool to me. I lifted with him a couple of times.”

However, Severin’s account of Pagourtzis’ alleged bullying was different. He told KPRC, “He’s been picked on by coaches before, for smelling bad and stuff like that. And he doesn’t really talk to very many people either. He keeps to himself.”

Montemayor III continued, “He was quiet. He did keep to himself. That’s pretty much it. I know he was quiet and everything but any conversations we had in the locker room or in the field or after games, he never struck me as that person.” He added that Pagourtzis “was a really cool guy.”

4A now-deleted Instagram page appearing to belong to Pagourtzis featured a photo showing a gun and combat knife.

An Instagram page that has since been deleted also appeared to belong to Pagourtzis. It only featured three photos, with one showing a handgun and combat knife, while another showed a shooting arcade video game.

The caption of the photo showing a handgun and combat knife read “Hi f**kers.” The bio section of the IG account read, “Numb.” The Instagram account only followed 13 pages, which were all related to either guns or President Donald Trump.