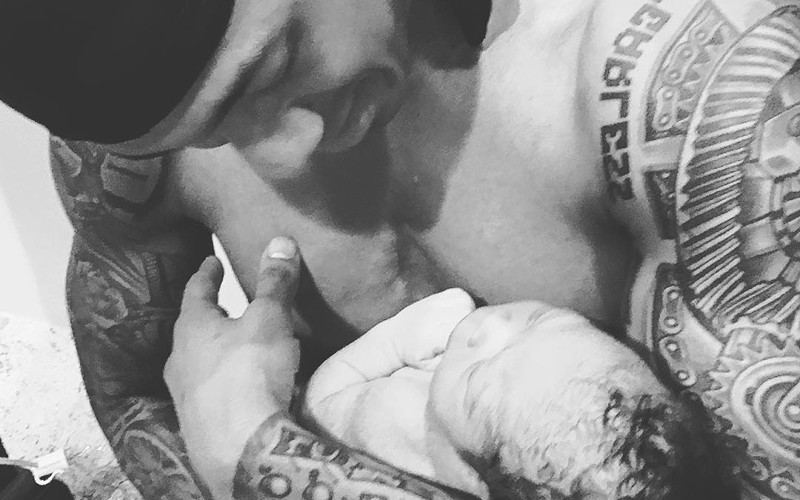 It was just a few months ago that Nick Cannon admitted he was going to be a father for the third time. Well, the new bundle of joy has arrived and Cannon seems to be one proud papa.

Cannon took to his Instagram account Wednesday (Feb. 22) to announce the birth of his son, Golden “Sagon” Cannon. The baby boy was born one day prior, Tuesday (Feb. 21). Cannon shared the first photo of his second son with a Bible verse and heartfelt caption.

Weeping may endure for a night, but Joy cometh in the morning! No matter how hard the world may hit you, God always reminds us of our purpose! #TrueHappiness Welcome to Earth Son! Golden “Sagon” Cannon 2/21/17 #Awakened

Cannon shares Golden Cannon with his ex-girlfriend, Brittany Bell. Bell is a model and former Miss Arizona USA. Though there were rumors, Cannon didn’t confirm the pregnancy until a November interview on The Breakfast Club.

Cannon has five-year-old twins with ex-wife Mariah Carey, which he affectionately refers to as “dem babies.” Golden is Bell’s first child.

The birth of baby Golden brings much joy to a rough week for Cannon. Last week, he reportedly quit his hosting job of NBC’s America’s Got Talent, after executive producers threatened to “punish,” possibly even fire him, over a joke in his recent Showtime comedy special. Producers felt Cannon disparaged the network, a violation of his NBC contract.

The comedian explained his decision to quit the show in a Facebook post. He wrote in part:

“I find myself in a dark place having to make a decision that I wish I didn’t have to, but as a man, an artist, and a voice for my community I will not be silenced, controlled or treated like a piece of property…

Not to get too detailed but this isn’t the first time executives have attempted to “put me in my place” for so called unruly actions. I will not stand for it. My moral principles will easily walk away from the millions of dollars they hang over my head.”

Quitting the show that made him a household name (or least something other than Mariah Carey’s Husband) may be difficult and sad, but the birth of his son is certainly something to celebrate. We wish Nick Cannon and Brittany Bell all the best as they co-parent baby Golden.