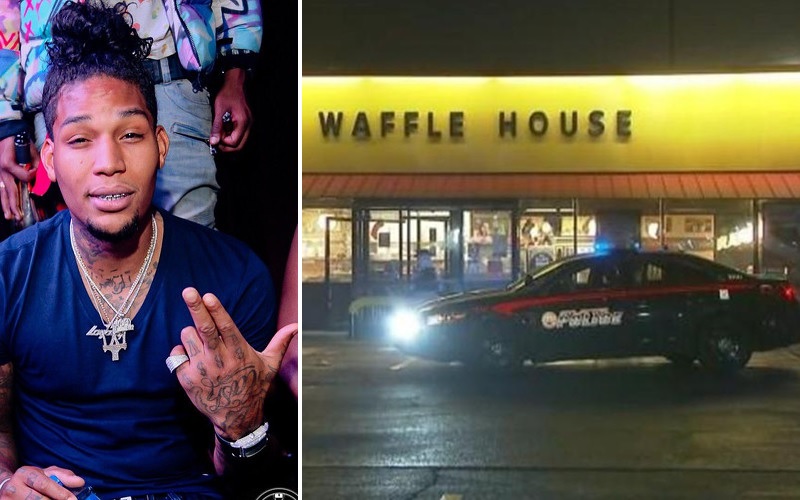 Up and coming rapper Yung Mazi has been shot multiple times. Though major details regarding the shooting have yet to be revealed, the rapper is expected to survive.

According to reports, the Atlanta-based rapper was shot inside the Buckhead Waffle House early this morning (Dec. 27) around 4 am. Mazi and a group of friends were ordering at the counter when someone already seated at a table with a group of men shot at the rapper. Some reports claim Mazi was shot in the chest, while others report he was shot in the arm.

Following the shooting, Mazi tweeted, then deleted, “God made me bulletproof.”

Despite being shot three times, the rapper was able to speak with police and was taken to the hospital by his own friends. Police are investigating the incident and the shooter remains unidentified and at large.

This is not the first time Mazi has escaped death. In fact, he may really be bulletproof. The rapper claims to have been shot upwards 10 times over the years, including once in the head.

“I just got shot a couple more times,” he said last year while in a hospital bed. “Three more times. It’s nothing. We do it [mucho], man. I done got shot 10 times.”

A couple of years ago… an old beef with a rival hustler came back to haunt him. He was shot five times—one bullet hitting him in the head and leaving him temporarily brain damaged, almost ending his life.

“When the bullet hit me in the head,” Mazi recollects, “it greatly affected me. I had to learn how to read, write, and speak all over again. I’m still not 100% right. I tried doing my daughter’s elementary school homework and it was hard. I couldn’t count money. My brother had to send text messages for me from my phone. It was deep.”

He titled his recent mixtape Physical Therapy because he was recovering in wheelchair from a previous gunshot at the time of its recording.

In a June interview, Mazi revealed he believes he keeps getting shot because of his skin tone and the expensive jewelry he wears.

“Look at me for one. I’m a red dude, people always don’t like the red dude for some reason… and I might walk around with a quarter-million-dollars-worth of jewelry on.”