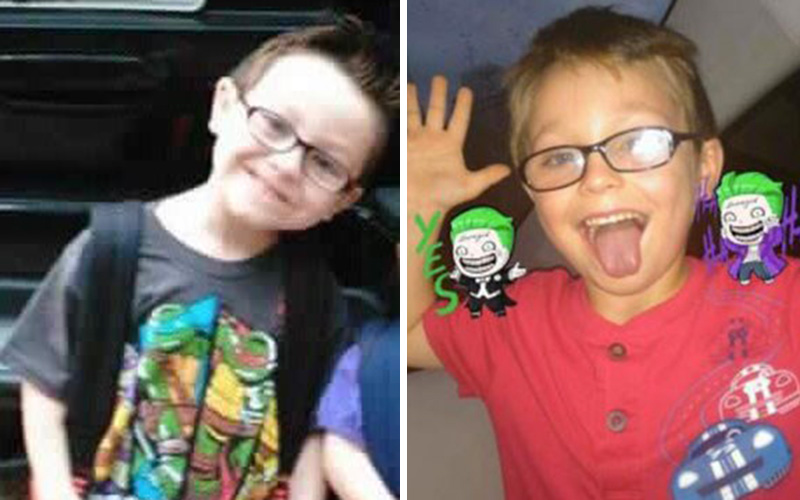 The six-year-old boy who was severely wounded in Wednesday’s (Sep. 28) shooting at Townville Elementary School in South Carolina has died.

Jacob Hall was shot, along with a classmate and their teacher, at around 1:45 p.m. on Wednesday by a disturbed teen boy named Jesse Osborne, who also shot and killed his father before driving to the elementary school and opening fire on the playground. Some of the kids said they heard Osborne yell “I hate my life!” as he hopped the fence and fired shots in the air.

Hall was immediately airlifted to Greenville Memorial System, where he underwent emergency surgery and remained on life support in critical condition for three days.

Hall died on Saturday, October 1st surrounded by his family.

Here’s everything we know about Jacob Hall and the shooting:

1. Jacob Hall was shot in the leg through his femoral artery. After spending 3 days in the hospital, he died due to him suffering a brain injury as a result of massive blood loss from the shooting. 6-year-old Jacob Hall is currently being treated at Greenville Memorial Hospital, which is about 40 miles north of Townville, South Carolina.

Officials said Hall was hit in his leg and the bullet went through his femoral artery. One of the largest arteries in the human body, the femoral artery is the main artery that transports blood between the legs and the heart.

“Jacob was shot in the leg. The bullet hit his femoral artery, causing massive blood loss, which led to cardiopulmonary arrest. He has undergone surgery and a number of procedures to try to stabilize his condition. He remains in critical condition.”

Hall’s family also released their own statement and confirmed to the Greenville News that he was on life support. “We’re waiting and hoping for a miracle,” said Gerald Gambrell, one of Hall’s older brothers.

As you all know, our nephew Jacob Hall was one of the victims in the senseless shooting at Townville Elementary Wednesday afternoon. The support and love that has been shown by the entire state has been overwhelming and very much appreciated.

Jacob is a very sick little boy and is fighting for his life. Due to the massive blood loss he has sustained a major brain injury. Jacob is in very critical condition, and we are hanging on every second.

Please continue to pray for Jacob and the other victims of this horrible, senseless act. Thank you all for respecting our family as we prepare for the days ahead.

We want to give special thanks to the doctors and nurses and to Travis Page for starting the GoFundMe page so Jacob’s family can spend every moment they can with him. We also want to thank Pastor David Blizzard and Associate Pastor Tim Marcengill with Oakdale Baptist Church.

God Bless You All,

The Bridges, Gambrell and Hall families

After Jacob passed away, his family released an updated statement:

“Our son, Jacob Hall, who was shot at Townville Elementary School on Wednesday, died today surrounded by family at Greenville Health System Children’s Hospital. Jacob came into our lives six years and four months ago and changed it completely. He showed us how to love, laugh and smile even on days we did not want to. God gave him to us and he was taken away from us by a senseless act. We know that Jacob has already forgiven this child for what he did to him and his family because that’s the kind of child he was. Jacob was sent to this earth for this short a period of time to show us that there is such a thing as pure love. Jacob is in heaven with God now and everyone who loves him. Words cannot express how much we will miss him.”

“Jacob was a tremendous fighter but was unable to overcome the catastrophic blood loss and resulting cardiopulmonary arrest caused when the bullet hit his femoral artery,” said Dr. Keith Webb of GHS (Greenville Health System) Children’s Hospital. “We grieve for the loss of this little boy and pray for his family as they work through this extraordinarily difficult time.”

2. Jacob reportedly “died twice” and had to be revived, once on the way to the hospital, the other time, at the hospital while in surgery. Jacob was playing outside when 14-year-old Jesse Osborne opened fire on the playground at Townville Elementary School. Some students reported hearing Osborne shout “I hate my life!” just moments before the shooting.

In a widely shared post on Facebook, State Rep. Alan Clemmons, a friend of Jacob’s family, wrote that the little boy “died twice and was revived.”

The bullet ripped through little Jacob’s femoral artery. He died twice, and was revived, during medical transport and again during surgery. He’s in ICU now where a team of doctors are working to stabilize him. Once stabilized, he will face yet another surgery. PLEASE join me in fervent prayer for little Jacob’s recovery. Thank you!!!

Clemmons shared in an update (via Jacob’s grandfather) the following day:

The good news is that the six year old victim continues to fight, though his condition is still critical. The shot that severed Jacob’s femoral artery required immediate chest surgery to staunch the blood flow. Grandaddy Steve is awaiting word on whether his little grandson’s condition has stabilized sufficiently to enable required followup surgery.

Grandaddy Steve’s request: “Please keep our Jacob in your prayers!” In an effort to offset the insurmountable medical bills Jacob Hall’s family will receive as he recovers from his injuries, a man named Travis Page, on behalf of Jacob’s parents Rodger and Renae Hall, set up a GoFundMe page that went viral on social media and quickly reached its $100K goal.

As most of yall have heard, Townville Elementary School had a shooting and one of the casualties was this sweet lil boy, Jacob. I am a friend of his parents and know the sweet lil fella. I m starting this GoFund me to help with them due to the fact that Rodger and renae will need to be with him as much as possible which means they will have to miss work. Any donation is helpful so that they can be with their baby and not have to worry about bills piling up on them. Thank you for your donation and and PLEASE pray for this sweet little boy and his parents and PLEASE PLEASE PLEASE donate whatever you have to spare (5,10,20…ANYTHING SO THEY CAN BE WITH THEIR SON!!!)!!

If you would like to mail gifts of any kind the address is as follows:
Rodger Hall
323 Hickory Ridge Rd.
Townville, sc 29689

According to the Greenville News, the fundraiser’s initial goal was $10,000, then after quickly reaching that goal, it was raised to $50,000, and now, after surpassing that number, the goal was pushed to $100,000, which, once again, was met.

GoFundMe announced Thursday that it had contributed $5,000 to the fund. “Our thoughts and prayers are with Jacob and his family,” the company shared in a statement. All in all, the GoFundMe raised $126,586 for Jacob’s family.

4. Meghan Hollingsworth, the teacher who was shot, told first responders “to take care of Jacob and not worry about her.”

Jacob was one of four shooting victims Wednesday. After shooting and killing his own father, the 14-year-old shooter, Jesse Osborne opened fire on the playground outside of Townville Elementary School, where he shot 6-year-old Jacob, one of Jacob’s classmates (another 6-year-old boy) and their teacher Meghan Hollingsworth.

According to NBC News, Townville Fire Chief Billy McAdams said in a press conference that Ms. Hollingsworth was more concerned with Jacob’s well-being than her own. McAdams said that as he and a school nurse tended to Jacob and the other wounded student (who, fortunately, didn’t suffer any life-threatening injuries), Hollingsworth told them “to take care of Jacob and not worry about her.”

As McAdams assisted the injured, volunteer firefighter Jamie Brock went to the back of the building an spotted the teen gunman. “Feeling that it was imperative to the safety of the students, the teachers and all the responders that were onsite, he immediately confronted and subdued that shooter,” McAdams said, adding that Brock kept the suspect on the ground until police arrived to take him into custody.

School administrators have called Brock “a hero” and noted that the quick-thinking actions of the school faculty/stuff everyone else involved may have prevented the tragedy from being worse. “He tried to fire his way into the classroom,” Joanne Avery, superintendent of Anderson School District 4, told NBC News. But “he was never allowed to access the building, and that’s because the staff knew how to lock down the school.”

5. Jacob Hall was described as a “smart” boy who loved to smile and often could light an entire room up with his bubbly personality. Gerald Gambrell said his little brother Jacob is a smart boy and “the top of his class in first grade.” He said Jacob loved to go to school in Townville, the only place he’s known as home. Hall attends Oakdale Baptist Church, which is about 4 miles down from the school and also served as the pickup location for parents after Wednesday’s shooting.

“He comes in Sunday School every Sunday morning with just a smile on his face,” said Oakdale’s associate pastor, Tim Marcengill. “He’ll make you laugh and tell you he loves you. And he loves the Lord, and he knew that the Lord loves him. Several weeks back, his grandfather led him to faith even though he’s 6-years-old, he had an understanding. He’s able to just make everybody in there on a Sunday morning light up.”

Gerald Gambrell added, “[Jacob’s] a wonderful kid. He doesn’t deserve any of this at all. No child in this world deserves this…It’s just heartbreaking and miserable that it happens to be my little brother.” Jacob’s life was celebrated with a superhero-themed funeral at Oakdale Baptist Church in Townville.

Mourners dressed as superheroes (or at the very least wore a superhero t-shirt) in honor of Jacob’s passion. Crowds of Captain Americas, Batmans, Supermans, and more filled the church as Jacob laid in his baby blue casket donning the costume of his favorite superhero — Batman.

Jacob’s funeral even had Batman himself show up in his Batmobile and Batman also delivered the eulogy.