GOSSIPONTHIS.COM Pop Culture Watch: Chance the Rapper Sings “Happy Birthday” to Beyoncé at Made in... 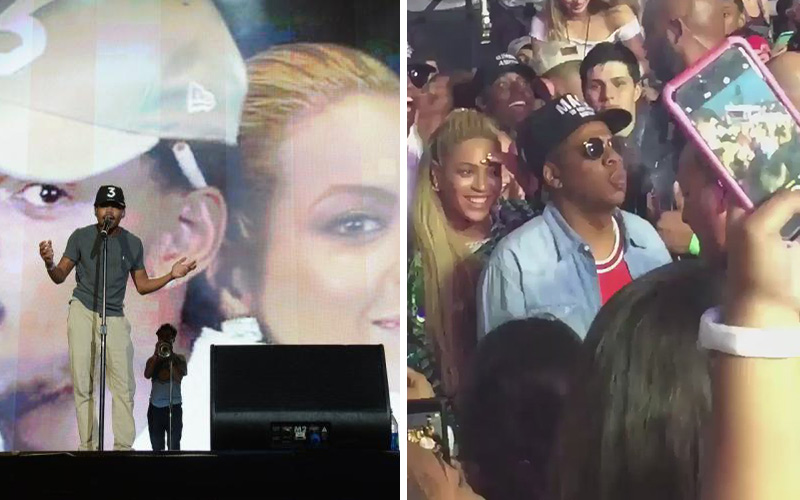 Chance the Rapper performed Sunday night (Sep. 4) at the Budweiser Made in America Festival in Philadelphia, and he used his time on stage to serenade a very special someone who was watching his set from the crowd as they celebrated their 35th birthday: Beyoncé!

“Auntie it’s your birthday, happy birthday Yoncé,” the 23-year-old rapper sung as Queen Bey and Jay Z (along with their very protective bodyguard Julius) were in the crowd.

Beyoncé seemed flattered (and a little embarrassed) by the birthday shout-out as she laughed before burying her face in Jay Z’s back while the crowd sang along. She showed her approval by raising her hands in the air and clapping with a huge smile on her face.

.@chancetherapper singing to Beyoncé for her birthday at #MadeInAmerica ?? pic.twitter.com/3qWg2P9R9c

Chance said his inspiration for the song came from an old episode of The Simpsons, in which guest star Michael Jackson sang to Lisa in honor of her birthday.

The inspiration for my @Beyonce birthday song last night: https://t.co/6DNKgXPUgI

Chance’s Birthday serenade to Beyoncé comes exactly one week after he made headlines and went viral on social media for his surprise reaction to Beyoncé crashing his backstage interview at the 2016 MTV VMAs, where Beyoncé slayed the stage with a 15-minute Lemonade medley.

According to E! News, Beyoncé enjoyed a PDA-filled birthday night with Jay Z at the MIA festival as they watched performances from Chance the Rapper, Coldplay and others.

“They were acting very affectionate and dancing with each other near the stage,” an eyewitness told E! News. “Jay Z had his arms around her and kissed Beyoncé during the show. He was dancing behind her the whole concert.

The insider added, “They looked madly in love … She told Jay she loves him.”