GOSSIPONTHIS.COM Music Watch Rihanna Reign Supreme with a Medley of Performances at the VMAs 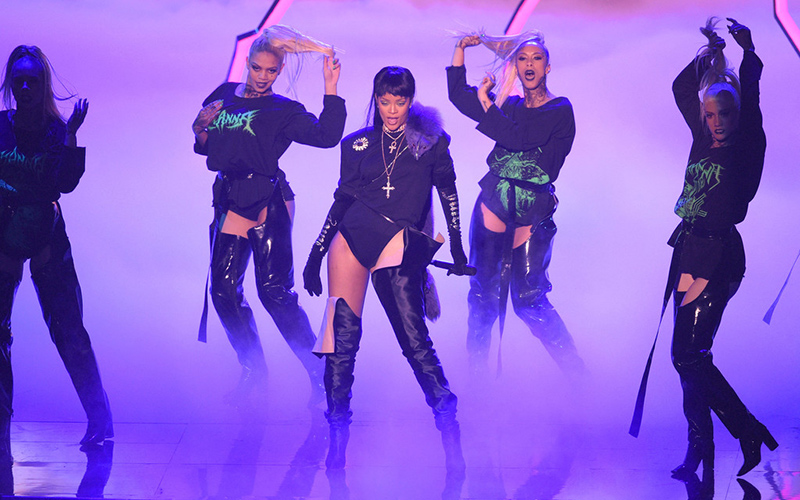 What if you found yourself being honored with a legacy award in your field at the tender age of 28? That’s exactly the situation Rihanna finds herself in as she accepts the Michael Jackson Video Vanguard Award.

It’s not as if she didn’t put in the work. She’s been in the game for 11 years and she’s put out an impressive 8 albums. So the work has been done, the time has been put in and the stats and accomplishments she’s earned speak for themselves.

So in a bid to give Rihanna the truly regal celebration she deserves, MTV decided to let Rihanna perform multiple times throughout the night. Rihanna divided her four performances up by theme.

Pulling from several hits in her dance-pop catalogue, Rihanna first performed a medley of “Only Girl,” “We Found Love” and “Where Have You Been?”

The Disco Diva segment was followed by RiRi honoring her island roots with a Caribbean set that featured her island-flavored tracks, “Rude Boy,” “What’s My Name?” and “Work.”

Next up was Ratchet RiRi, which we’ve been seeing quite a bit of since Unapologetic. For this set, Rihanna pulled out some seriously high boots and stomped through the songs “Needed Me,” “Pour It Up” and “Bitch Better Have My Money.”

Ending things on a classy note, Rihanna pulled together her ballad set and took a break from doing her two-step on stage and showed off her vocal chops. We got a little “Stay,” “Diamonds” and “Love on the Brain.”