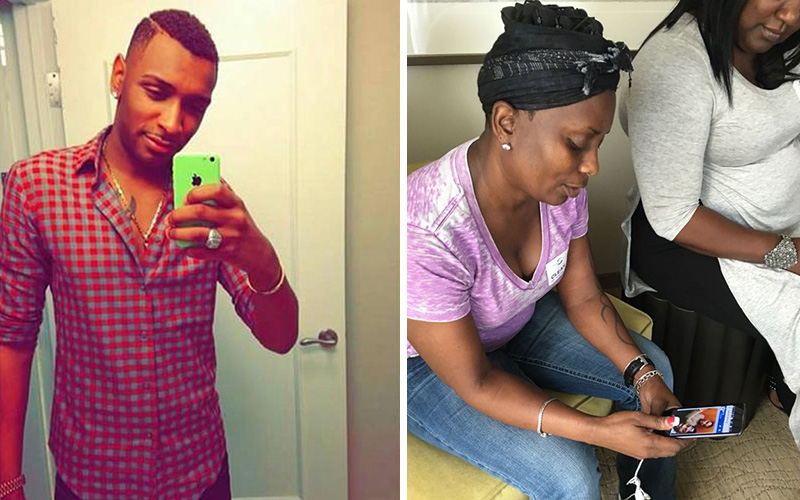 That is how Eddie Justice started what would end up being his last conversation with his mother as he hid inside a bathroom at Florida nightclub early Sunday morning (Jun 12) as a lone gunman opened fire on hundreds of people, killing approximately 50 and injuring at least 53. Justice was pronounced dead by Orlando officials late Sunday night.

He told her than he had ran into a bathroom with other people to hide, and then wrote “he’s coming.” His final text messages said, “He has us… He’s in the bathroom with us… He’s a terror.”

Eddie: “In club they shooting.”

Mina: “U still in there”

Mina: [Are you with police?]

Eddie: ‘”Still here in bathroom. He has us. They need to come get us.”

Mina: “Is the man in the bathroom wit u”

Mina: “Don’t do nothing”

On Sunday afternoon, while awaiting news of her son’s condition at a hotel with other family members of victims, in an interview with the Associated Press, Mina Justice said she still didn’t know whether or not her son was OK.

At that time, a running list of victims’ names was being released, but Eddie’s name wasn’t on it. Early Monday morning, the City of Orlando released the name of the 9th victim: Eddie Justice.

Eddie Justice, who was missing after texting with his mom during the Orlando attack, has been confirmed dead pic.twitter.com/UgY3GdWn8W

Police had recovered his body late Sunday evening, and other details regarding his death weren’t immediately released. His mother and other relatives had already been notified by the time his name was added to the list.

In her AP interview, Eddie Justice’s mother described him as a homebody who liked to eat and work out, and he also enjoyed making others laugh.

He worked as an accountant and lived in a downtown Orlando condo. “Lives in a sky house, like the Jeffersons,” she would tell people. “He lives rich.”

Police have said there were at least 300 people in the club at the time of the shooting, which is being called the deadliest in U.S. history.

President Obama released a statement urging people to pray for the victims and their families. He called the incident “an act of terror and an act of hate.”