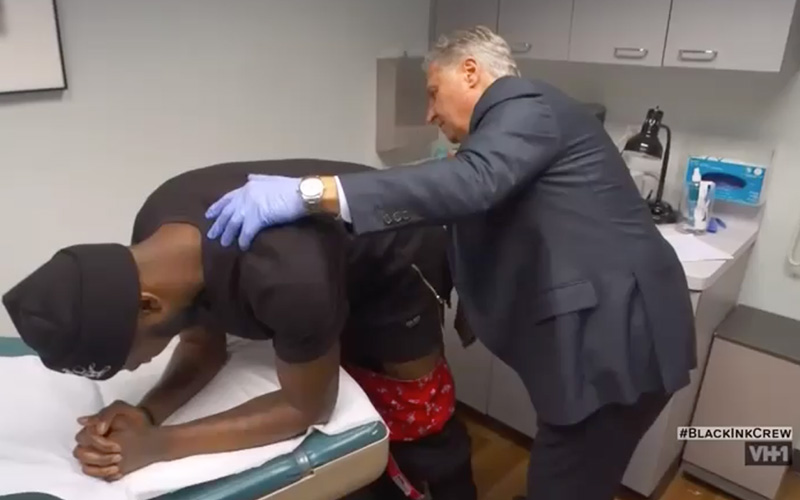 Out of all of the reality shows VH1 airs, Black Ink Crew is, hands down, the realest.

Black Ink Crew follows the lives of a group of Black tattoo artists working out of a shop in Harlem, New York City, which makes you think the show is all about tattoos. But out of 60-plus episodes over 4 seasons, I’ve only seen maybe a dozen or so tattoos, because Black Ink Crew is more about the “crew” than it is about the “ink.”

Each episode is filled with just the right amount of drama and ratchetness from its cast to keep viewers intrigued and anticipating the next one. Of course you get that with Love & Hip Hop and other popular reality shows on other networks, but with Black Ink Crew, everything feels more genuine and less scripted. Yes, I do realize ALL reality shows are somewhat “scripted,” but compared to the others, BIC is the most bona fide.

On Season 4, Episode 10 of Black Ink Crew, which aired this past Monday night (Jun 6), O’Sh*t, concerned about seeing blood in his urine, goes to see his doctor, because that’s what one should do when seeing blood coming out of places where it shouldn’t be coming from.

And when you’re O’Sh*t, who obviously enjoys raw sex (he has at least 3-4 children with at least 3-4 women, it’s hard to keep count, honestly), blood coming out of your penis is probably a big deal.

The doctor, which happens to be the same guy O’Sh*t was considering to perform his vasectomy in an earlier episode this season (he didn’t end up going through with the procedure), explains that blood in the urine typically warrants a prostate exam and he should have one done immediately. Noticing and hearing O’Sh*t’s apprehension (“I don’t think so,” he says in response to the prostate exam suggestion), the good doctor tells him, “It’s not a big deal.” But, for O’Sh*t, this IS a big deal, and the doctor awkwardly explaining how the procedure would be done probably didn’t help matters.

Take a look for yourself:

“We’re just going to ask you to pull down your pants, and then I’ll lubricate my finger and I’ll examine your prostate. Sounds good?”

Uhm, no sir, strange white man. This does NOT sound good.

“C’mon, stand-up. This is gonna take two seconds. Take your pants down, and your underwear, and just bend over a little bit on your elbows. I’m gonna put some lubrication on my finger, I’ll take two seconds.”

“As much as I don’t want a doctor’s hand in my butt, I know I have to do it, ’cause the last thing I need is for my dick to fall off,” O’Sh*t says to the camera. Honestly, the way O’Sh*t treats his penis (he actually had sex with this. HOW GROSS.) he should welcome any type of exam that makes sure everything is still A-OK down there.

So O’Sh*t goes through with the prostate exam, and, awkwardly enough, the whole thing was done in the presence of a camera/production crew for a reality show, because ratings.

Afterward, O’Sh*t collapsed into the corner like he had just been violated in the worst way.

“When we see blood, either in the stool or in the urine, we have to evaluate it completely,” O’Sh*t’s doctor explains. “We really have to determine whether you had any cancer or anything like that.”

What doesn’t lead to cancer? Except, everything.

All jokes aside, I hope everything is OK, and I’m pretty sure O’Sh*t doesn’t have cancer.