GOSSIPONTHIS.COM Politics Why Someone as Temperamental as Trump Should Never Have His Finger Near... 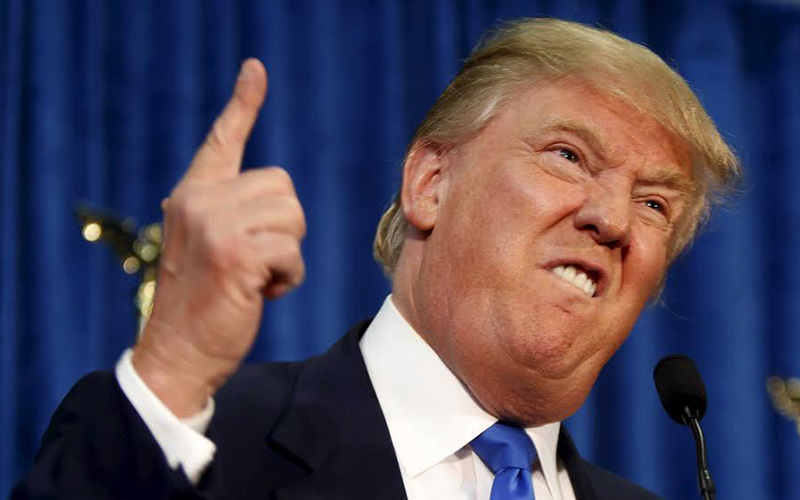 There are a multitude of reasons why presumptive Republican presidential nominee Donald Trump is not qualified to hold the highest-elected office in the country. First and foremost, he has zero experience, not in Congress, not as a governor, and not even as a mayor or a city council member.

At this point, I’d take some solace knowing he was the senior class president of his high school. He’s never served the United States in any diplomatic capacity, and his foreign relations don’t extend beyond lavish vacations. His policy ideas are born out of ignorance, hatred, fear, misogyny, bigotry and exclusion.

But perhaps the scariest thing about Donald Trump is he’s a bully who has graduated from stealing lunch money, to verbally abusing anyone who would oppose him. As the leader of the free world, how are we supposed to trust someone so emotionally volatile to keep us safe?

Is it so far off the mark to imagine an enraged Trump, comb-over askew, ranting and raging red-faced after some real or perceived slight, declaring war to keep his ego intact? Worse yet, his abhorrent personality could alienate us from allies, create greater chasms between us and our foes and destroy tenuous bonds.

Many voters argue a woman can’t be president because she’ll be too emotional. As if the slightest obstacle will send her into a tailspin that would include tears, binging on ice cream and stalking any adversaries on social media. But it’s Trump who has time and again thrown tantrums when confronted with anything that doesn’t resemble praise or adulation. If beheadings were still in vogue, Trump would be a modern-day Henry VIII, lopping off the heads of his perceived foes.

You can dismiss the celebrity feuds as inconsequential to the election except for the fact that they 1) Speak to his character 2) They are voters and 3) It demonstrates a verbally abusive and aggressive pattern of behavior. Also of note is how Trump devalues women if he doesn’t find them physically attractive and responds in kind.

Trump called Huffington “unattractive both inside and out” and went on to say he understood why her husband left her. After penning an unflattering piece about Trump, New York Times columnist Gail Collins received a copy of the article with her picture circled and “The Face of a Dog” written over the top of it.

What happens when Trump comes face-to-face with South Korea’s Park Geun-hye, or German Chancellor Angela Merkel or the President of Brazil, Dilma Rousseff? Not to mention all the female politicians, journalists and lobbyists in Washington D.C. What about his working-class female constituents who don’t resemble Barbie dolls?

It’s not just women who bear the brunt of Trump’s foul-mouthed temper either. He called Pope Francis a “pawn,” Ted Cruz “a basket case,” Lindsey Graham a “disgrace and a nut job” and former POW John McCain “not a war hero.”

This is all just the pre-show, folks. The atrocities that could spill out of Trump during the main event are innumerable.

I realize Americans are frustrated, fed up with the status quo. Trump is an outsider, a repugnant rebel with a cause. But ask yourself if an overgrown toddler, a swindler, an elitist, a man whose heart is filled with vitriol and hate who doesn’t think before he speaks or show any empathy or remorse for his numerous misdeeds is really going to “Make America Great Again.”

If Trump is elected, I know my head will hit the pillow every night filled with apprehension that there could possibly be no tomorrow.