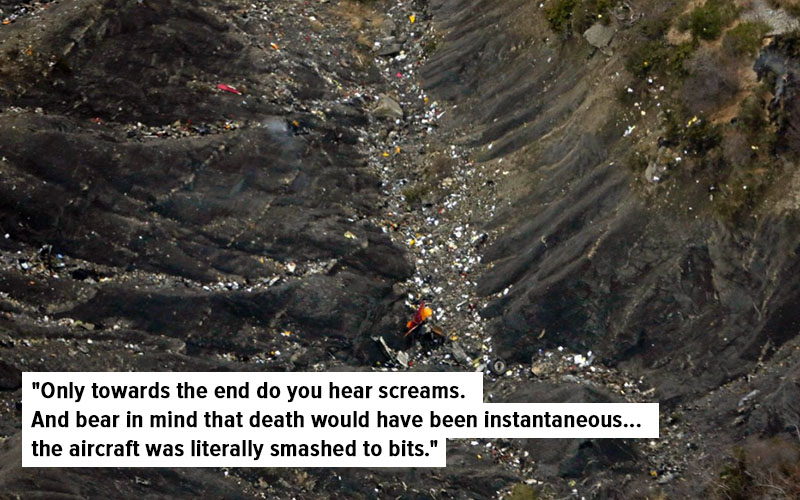 After listening to audio from the cockpit voice recorder officials recovered from the wreckage of Germanwings Flight U49525, the Public Prosector of Marseille, France has determined that the plane’s co-pilot Andreas Lubitz clearly intended to “destroy the aircraft.”

The news comes just two days after the airplane crashed in the French Alps, killing all 150 people on board.

Flight 9525 took off just after 10 a.m. Tuesday from Barcelona, Spain, for Dusseldorf, Germany, with 144 passengers — among them two babies — and six crew members.

Helicopter crews found the airliner in pieces, none of them bigger than a small car, and human remains strewn for several hundred meters, according to Gilbert Sauvan, a high-level official in the Alpes de Haute Provence region who is being briefed on the operation.

“We at Lufthansa are speechless that this aircraft has been deliberately crashed by the co-pilot,” said Carsten Spohr, the CEO of Germanwings’ parent company Lufthansa.

Marseille prosecutor Brice Robin said Lubitz acted “for a reason we cannot fathom right now but which looks like intent to destroy this aircraft.”

French and German officials said there was no indication Lubitz — who friends described as a nice guy — was a terrorist, and French prosecutors offered no motive for why the 28-year-old apparently took control of the Airbus A320, locked the captain out of the cockpit and “activated the button that commands the loss of altitude,” deliberately sending the plane veering down to the ground.

Setting the plane’s controls for rapid descent was an act that “could only have been voluntary,” Robin said. “He had… no reason to stop the pilot-in-command from coming back into the cockpit. He had no reason to refuse to answer to the air controller who was alerting him on the loss of altitude.”

The captain, who had stepped out of the cockpit, probably to use the toilet, tried to force his way back in: “You can hear banging to try to smash the door down,” Robin said.

Describing sound recordings from one of the plane’s black boxes, Robin said most of the passengers would not have been aware of their fate until the very end.

“Only towards the end do you hear screams,” he said. “And bear in mind that death would have been instantaneous…the aircraft was literally smashed to bits.”

FlightRadar24, an online air tracking service that uses satellite data, said it had found evidence the autopilot was abruptly switched from cruising height to maintain an altitude of just 100 feet, the lowest possible setting. The plane crashed at about 6,000 feet.

“Between 09:30:52 and 09:30:55 you can see that the autopilot was manually changed from 38,000 feet to 100 feet and 9 seconds later the aircraft started to descend, probably with the ‘open descent’ autopilot setting,” Fredrik Lindahl, chief executive of the Swedish tracking service, said.

The French government is asking the FBI to help investigate the crash, and a search is underway for the flight data recorder (also called the “second black box”), which could give officials even more detail into the plane’s final minutes.

Now that officials know what happened, they can try and figure out why it happened.

According to Reuters, Lubitz only had 630 hours of flying time when he joined the airline, a stark contrast to the 6,000 hours the flight captain “Patrick S.” had.

Prosecutor Robin noted that there were was no reason to suspect Lubitz was carrying out a terrorist attack, and he also said that “suicide” was the wrong word to describe the co-pilot’s actions.

“I don’t necessarily call it suicide when you have responsibility for 100 or so lives,” Robin said.