GOSSIPONTHIS.COM Celebs Macklemore’s Fiancée Is Reportedly Pregnant With His Baby 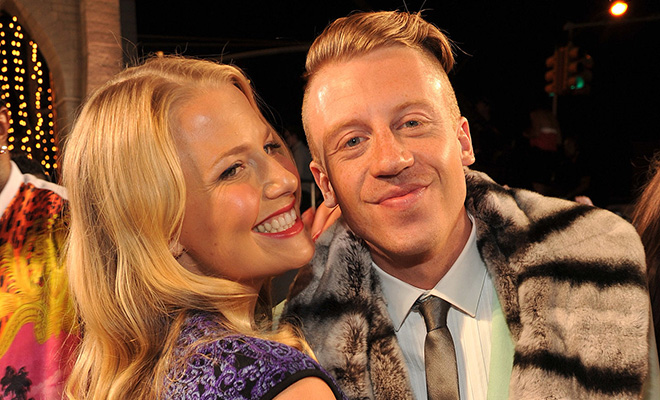 Make that two things Macklemore will be releasing this year. In addition to a new album, the Grammy Award-winning rapper and his girlfriend are having a baby.

According to Page Six, Macklemore’s fiancée and road manager Tricia Davis “is pregnant with the couple’s first child.”

Spies in Las Vegas over New Year’s noticed Davis, in a loose-fitting black dress, wasn’t drinking while out with Macklemore and pals. The couple and their entourage had dinner at the Mirage restaurant Stack before his performance at 1Oak.

“Tricia wasn’t drinking while everyone else had a cocktail,” a spy said. Then, at 1Oak where Macklemore performed with Ryan Lewis, the rapper kept a close eye on Davis, who’s also his road manager.

“She was dancing and standing in the back, but not really with the crowd. If Macklemore wasn’t performing, he was right next to her, guarding her,” our spy said, adding that when Davis put her hand on her stomach, “that’s when you could see a baby bump!”

Macklemore and Tricia have been together for eight years and have been engaged since January 2013.

Reps for Macklemore have yet to respond to the baby reports, but the rapper did announce via Twitter that his next album will come out at some point this year, and a source confirmed to Billboard it would be out “most likely in the second half of the year,” though details regarding a lead single and actual release date are “currently under wraps.”

RT @loucereal: Its 2015 and I still don't have a new @macklemore album wtf <- you will this year. Believe that