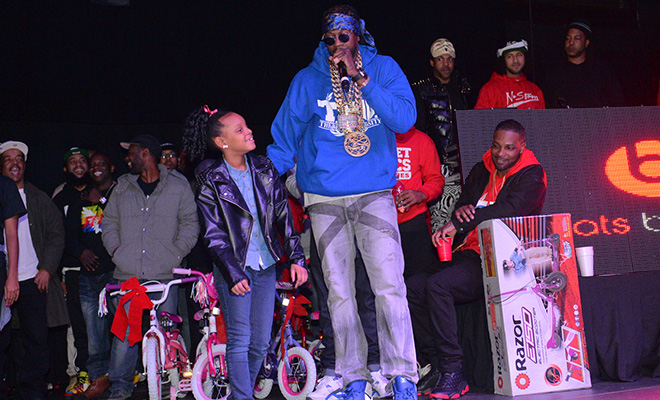 Young Jeezy wasn’t the only ATL rapper playing Santa Claus to inner city kids. 2 Chainz also took on the role of St. Nick when he handed out toys during his annual holiday giveaway in Atlanta Tuesday (Dec 23).

Uncle Chainz filled up two U-Haul trucks with gifts and passed them out to the little girls and boys. There were so many gifts that he had some leftover to donate to his church.

Trucks loaded up! It's all about the give back, We on the Soufside ..First stop Godby Road apartments… TRUchristmas

Dropped the rest off at the church

The night before, Chainz gave out bikes onstage at the 5th Annual Street Execs Christmas concert, which he headlined.

During the show, he brought out a Make-A-Wish kid named Antoine, whose dream was to meet his favorite rapper, and he held his hand while performing “I’m Different.”

Last night I had the pleasure of meeting lil Antoine all the way from Minnesota, thanks to the Make a wish Foundation. His one wish was to meet me and get a chance to perform with me. Last night his wish came Tru. Kodak Black Apologizes to Nipsey Hussle for Trying to Shoot His Shot at Lauren London After Nipsey’s Death: “I Never Meant to Disrespect Your Queen”