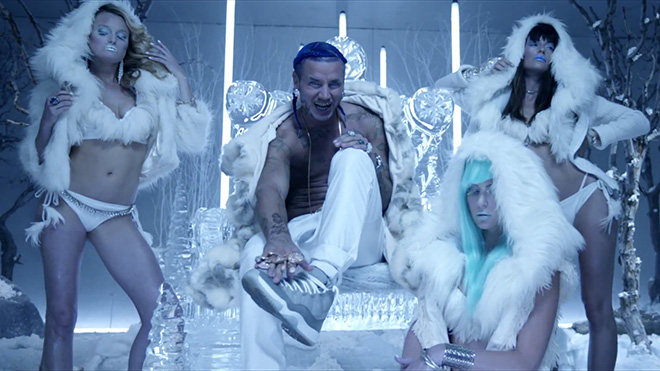 RiFF RAFF is the type of guy that falls into two categories. Either you love him, or you love to hate him. But regardless of what side of the fence you’re on when it comes to Jody Highroller, you can’t deny the fact that “TiP TOE WiNG iN MY JAWWDiNZ” is one of the catchiest songs you’ve ever heard!

RiFF RAFF is known for his rather “eccentric” behavior, so it’s no surprise that the video for his latest single is hilariously ridiculous.

The video — which was co-directed by Mike Finnegan and RiFF RAFF — starts off with a British woman asking, “Tiptoeing in one’s Jordans? What on earth is all this riff raff about?” and then we see RiFF RAFF (rocking a pair of Jordans, or “JAWWDiNZ,” of course) in an ice palace sitting on a throne surrounded by girls wearing fur bikinis.

The rest of the video is peppered with shots of a praying mantis dancing on an avocado, a skull getting covered in paint, RAFF walking a dog and people tiptoeing in their Jordans … because, duh. Comedian Andy Milonakis and a can of Monster Energy Drink also make cameos.