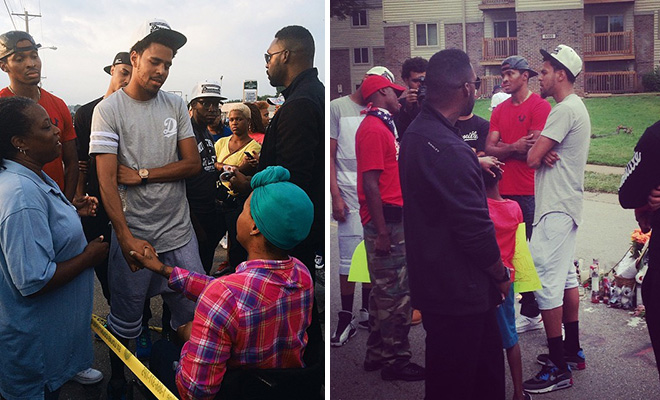 J. Cole released a tribute song in honor of Michael Brown titled “Be Free” last week, and on Sunday (Aug 17), the rapper paid a visit to Ferguson, Missouri to pay his respects to the teen who was shot and killed by a police officer last Saturday.

Accompanied by members of his Dreamville label, Cole stopped by the scene where Brown was killed and spoke to protestors and activists about the civil unrest taking place in the St. Louis suburb.

He also made other stops in the neighborhood, including a visit to the QuickTrip gas station that has been referred to as “ground zero,” where protestors and police have battled, and is not too far from where Brown was gunned down.

Photos and Instagram videos of Cole’s appearance were captured by residents on the scene as he interacted with them and community leaders.

Lots of love for Cole. pic.twitter.com/7gVMk4gNnq

J. Cole is out here supporting the protesters pic.twitter.com/t3hW2owzA2

On “Be Free,” released last Friday (Aug 15), J. Cole skipped the rapping, opting instead for “haunting and heartbreaking singing over a piano,” MTV News noted.

The song also includes audio of Michael Brown’s friend Dorian Johnson, who was with him at the time of the shooting, recounting the events that led to his friend’s death.