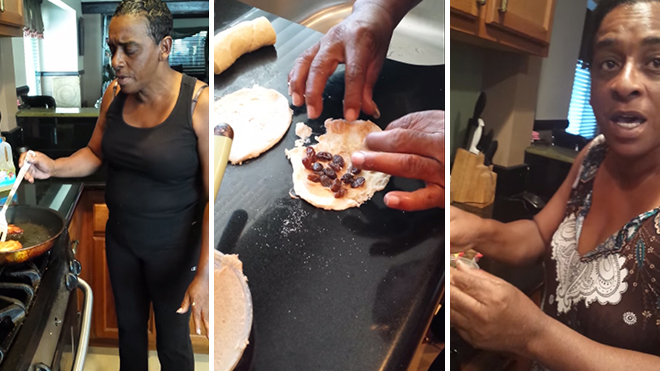 The Internet is the gift that just keeps on giving, and today’s gift comes courtesy of Aunt Felicia O’Dell and her resourceful cooking skills.

Felicia O’Dell (aka “Auntie Fee”) is your foul-mouthed auntie that gives not one fuck about your feelings, but still has a heart of pure gold.

In one of Chef Auntie Fee’s popular YouTube videos, she shows us how to make a meal for seven people with just $3.35 in less than 5 minutes.

She uses a couple of packs of ramen noodles, some leftover chopped up steak from “some tacos I sold last week” and a little dry parsley to “give it some color like you got seasoning in it, which you really do,” she says.

Her most popular video, with over 1 million views, is titled “Sweet Treats for the Kids,” and it doesn’t take long for you to realize why we love Auntie Fee so much. This is how the video starts:

“If you don’t have no crescent rolls, you can use any cheap ass donuts or whatever, it don’t matter … This is butter, sugar and cinnamon. Put a lot of sugar in it so it’ll taste real good for the kids and shit.”

As Auntie Fee places raisins on one side of her buttered uncooked crescent role, her camera man mistakenly refers to her concoction as a donut, and Auntie Fee quickly lets him know the real deal:

“No, nigga, I don’t know what the fuck this is, OK? It’s just something sweet for the fuckin kids, OK? Damn! You gotta stay wit me now, shit!”

Her camera men then calls Auntie Fee’s raisin, butter, sugar and cinnamon-filled crescent rolls “prison food,” and she again puts him right back in his place:

“Mothafucka, this is not prison food, OK? I gotta get me another camera man because you trippin!”

When pressed for a name for her sweet treat “for them kids and shit,” Auntie Fee gets even more irate than usual:

“I don’t know, it’s somethin for them kids. It’s a dessert … Gotdammit, I ain’t got no mothafuckin name for it, yet, mothafucka! Shit”

Auntie Fee and her cameraman then agree on “Aunt Fee’s Sweet Treats” before she goes to make some a little “punk-ass cinnamon roll.”

Here’s another video of Auntie Fee seasoning chicken in the sink:

SON. OF. A. MOTHER-FUCKIN BITCH.

Here are the best Auntie Fee Quotables (via First We Feast):

On cheese: “Kids and fat people like a lot of cheese.”

On seasonings: “It’s optional to use this shit.”

On how long to cook frozen chicken wings: “Cook for three hours if you want it to fall of the motherfuckin’ bone—I swear this shit will.”

On naming her creations: “Goddamit, I ain’t got no motherfuckin’ name for it yet, motherfucker!”

On following to her instructions: “I tell you everything because I don’t want you motherfuckers calling me about a motherfuckin’ thing.”

On knowing when a dish is done. “This bitch is ready!”

THIS BITCH IS READY! Someone get this lady her own cooking show.