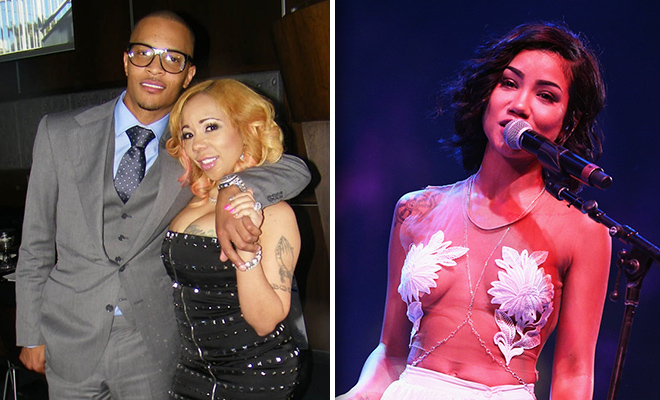 What the hell is going on with T.I. and Tiny?

Despite them putting up one hell of a front on their reality show “The Family Hustle,” T.I. and Tiny are definitely having some issues within their marriage.

They’ve bashed each other publicly on social media, they were “caught” vacationing separately with their children from previous relationships, and now T.I. is throwing hints about the rumors that he and Tiny are on the verge of a break-up on a remix of Jhene Aiko’s “The Worst.”

The southern rhymer jumps on the song and starts spitting out a response to a woman who’s been bashing him. After he lays down the verse, Jhene’s vocals float over the sped up melody. So instead of a tranquil ballad, the R&B track is something that one can groove to despite T.I.’s strong and vengeful lyrics.

“Yeah, I know I was clowning / I know you wasn’t just going to take that laying down and / I’ll be the first to say it, I was dead wrong… / But if it isn’t worth shooting my in the head don’t / take to social to try me / Putting folk all in our BI all on IG / Nah, I don’t believe it, I don’t wanna see it / Maybe I wake up tomorrow it’ll be deleted / You out the country in bikinis on beaches / While I’m in the studio doing features like…,” he delivers on his second go at the mic.

His words do seem to address that time Tiny decided to upload a photo of her booty on Instagram, which lead to the rapper blasting her for doing so.

This isn’t the first time we’ve been hearing about the tiffs between the couple. Earlier this year, divorce rumors spread when they had a disagreement about attending the 2014 Grammy Awards — she wanted to and he did not. Is this just the precursor to more drama between the two?

Listen to the song here: