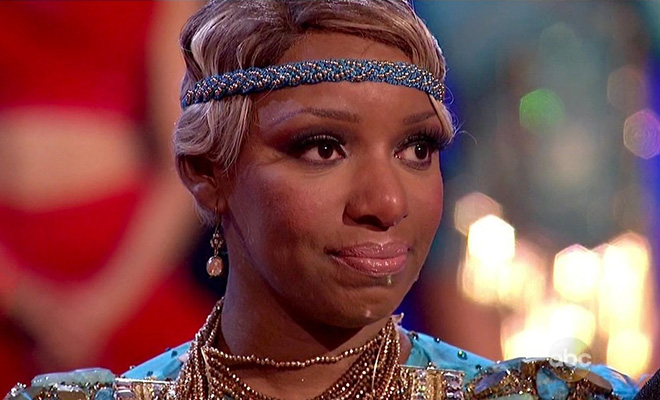 NeNe Leakes was voted off “Dancing with the Stars” this week, and we couldn’t help but notice how in her exit interview she seemed to blame it on the drama that’s going on with “Real Housewives of Atlanta” right now.

Leakes told reporters backstage that she had to tape the epic, drama-filled “RHOA” Season 6 reunion special in between rehearsals for “DWTS,” which she says made things very “tough” for her.

“It was tough!” the 46-year-old reality star said. “I had to fly back [to Atlanta] to do the reunion and dance at the same time, Tony [Dovolani] had to go there with me – so that was tough … staying in a positive place is tough.”

NeNe also discussed her friendship with cast mate Cynthia Bailey, which she says “has come to an end,” leaving very little room for reconciliation between the former BFFs.

Asked if she was going to return to the show for season seven, Nene admitted, “There’s a lot of hesitation … I feel like when I began my journey on Real Housewives of Atlanta, it was more positive. People tuned in to see fashion and fabulousness — never pulling hair or belittling or being super negative. I can’t even believe how it’s changed.”

But on the other hand, Leakes said she found lifelong friends on “Dancing with the Stars,” which she called an “amazingly positive experience,” seemingly throwing a jab at her “Housewives” castmates.

“I’m going to be leaving this show with friends for life. This has been an amazingly positive experience for me,” an emotional Leakes told E! News. “I do know there are positive people to work with in the world.”