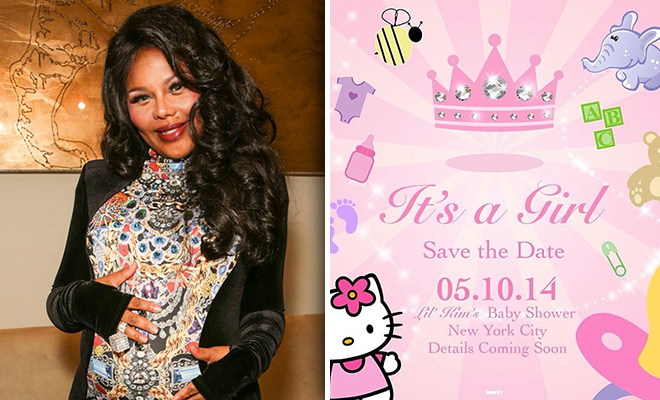 Lil Kim has revealed that she is expecting a baby girl!

The rapper announced the sex of her baby on Instagram Sunday night (Apr 20) with a save-the-date flyer for her upcoming baby shower, which will be held in New York City on Saturday, May 10th.

The flyer features a a pink background and reads “It’s A Girl.” It also has a pink diamond-encrusted crown at the top, as well as a picture of Hello Kitty in the corner — a clear indication that Lil Kim is having a baby girl.

“Happy Easter everyone! What a perfect day to share this wonderful news with U. The fab @davidtutera is throwing my royal baby shower for my lil’ princess 5/10/14!” Kim captioned the photo.

Lil Kim announced that she was pregnant with her first child back in February at New York Fashion Week. “I’m a mom, but I can turn it up a little!” the Brooklyn rapper said as she rubbed her growing baby bump.

At the time, Lil Kim wouldn’t say how far along she was, and she had chosen to keep the identity of her baby daddy private “for now.”

However, a source told the NY Daily News’ Confidenti@l that Kim was about four months pregnant (which would mean she’s about six months pregnant now), and the reason she was so secretive about her pregnancy is because she was gearing up to film a reality show in the spring, which is when she would reveal the identity of her unborn child’s father.

Her off-and-on boyfriend Mr. Papers seems like he already confirmed himself as the baby’s father. “Yeah, that’s my baby,” he told the Rickey Smiley Morning Show.