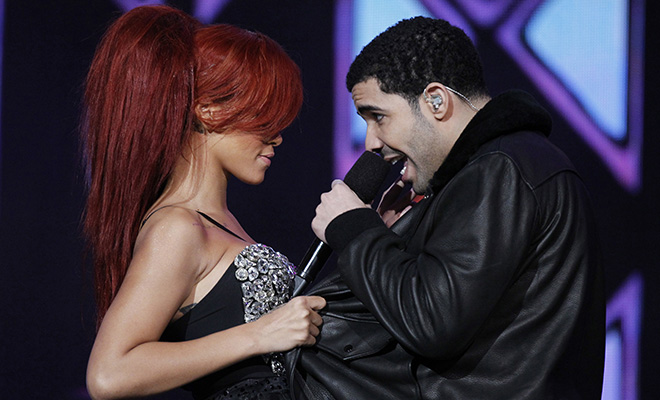 Drake talks about drinking tea with Erykah Badu and spending time with Rihanna in Amsterdam on his new track “Days In The East.”

Drizzy released the track, which was co-produced by PARTYNEXTDOOR and Noah “40” Shebib, on his OVO blog Thursday morning (Apr 4), and it’s VERY evident that it is an ode to his new girlfriend.

The song opens with him wondering why the girl he’s currently with, wants to question him about other women, and while this could be referring to anyone, there are a few suggestive lines.

In the song he includes background vocals pulled directly from Rihanna’s song “Stay.” While he doesn’t sing it himself, the line, “I threw my hands in the air and said show me something,” is clearly audible.

Elsewhere he raps, “Ain’t the first time cause I’ve lost you before/Had to get it back.” Drake’s brief romance with Rihanna has been well-publicized, and though he’s maintained that they’re just friends, they’ve been spending plenty of time together in Europe recently while he wrapped up his tour.

They were spotted in Amsterdam and London together just last month, so it only fuels speculation when he spits, “Take a flight here, pop a Xan for the boy/Waking up in Amsterdam with the boy.”

And if you follow Rihanna on Instagram, you’ve certainly see her post photos of the freebies she receives from brands like Chanel. So one more line that might be directed at her is, “F–k them h–s, you got the award already/You go to Chanel and get rewards already.”

Yup. Drake is DEFINITELY talking about Rihanna in this song!