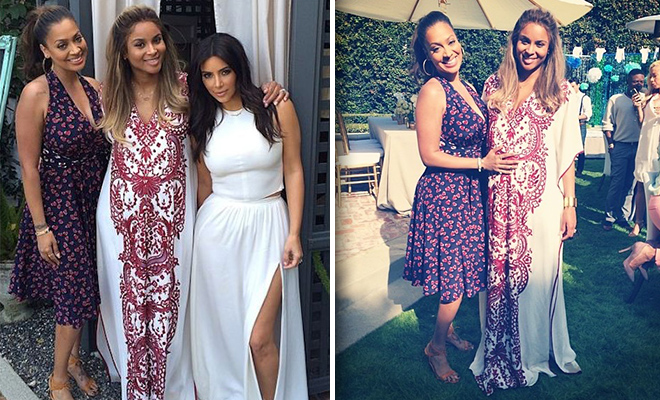 The singer is expecting her first child with her rapper fiancé Future, and the baby will be here in less than two months.

So to celebrate, her BFF LaLa Anthony threw her a baby shower in the style of a “garden party” last weekend at a private residence in Los Angeles, which was attended by a number of CiCi’s family and close friends, including her own mother Jackie, Future’s mom Stephanie, her close friend Kim Kardashian, and Kim’s mom Kris Jenner too.

Dad-to-be Future (real name: Nayvadius D. Wilburn) showed up a little later in the afternoon to take part in the festivities and support his future wife.

Though Future already semi-confirmed the couple were having a boy earlier this month when he referred to his unborn child as a “he” and “him” in an interview — “The baby is already listening to music now. [Ciara] sent me a video while I was over here with the headphones on her stomach. She said, ‘The baby just listened to Turn On The Lights, the version with me and you!’ I said, ‘You gotta play that Anytime for him, the new one you did. Let him hear that. See how he kick.'” — the baby shower’s decorations, cake, party favors and gifts further confirmed that Future and Ciara are definitely having a baby boy.

According to E! News:

Inside of the event, a buffet lunch was set up in the backyard of the home and everyone sat at round tables. All of the decor was blue, and little white onesies were hung from strands of blue beaded curtains.

“There were also tissue paper poms in many different shades of blue, and the centerpieces each had white branches with blue eggs and a little bird,” the source continued. “There were also white orchid arrangements throughout the yard.”

Guests at the shower feasted on fried chicken and waffles, and for dessert a multi-tiered cake with a blue fondant ribbon was served.

“Ciara was glowing and seemed so excited about having a baby,” the source said. “She had so much fun with her girlfriends opening presents and getting all of these last minute items for her baby.”

At the end of the shower, Future arrived dressed very casually in jeans and a hooded sweatshirt. He helped pack up all of the gifts for Ciara which also included a play gym, stroller, high chair and bath tub.