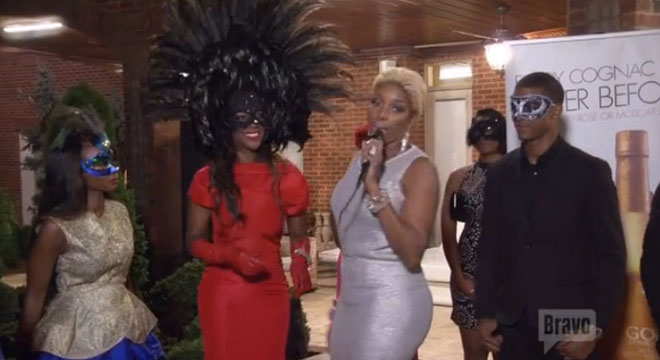 After the debacle that went down the last few episodes, the ladies of “Real Housewives of Atlanta” have decided it’s time to put the violence behind them. Porsha organizes a roller derby event for the girls and everyone shows up for the fun, except for NeNe. Little Miss Sourpuss is still at home, licking her wounds about her event that went haywire. It’s her loss because for once, all of the ladies get along quite well and Kenya even bravely apologizes for her role in escalating the firestorm that broke out at NeNe’s pajama party. The girls are all receptive to Kenya’s apology, except for Phaedra, who throws shade on it during her confessional. But hey, a leopard ain’t gonna change its spots.

After their pow wow, Kenya, Cynthia and Porsha get out on the floor and start roller derbying while big booty Phaedra and Kandi sit their Georgia peaches right on the couch and watch from afar. Apparently their donkey booties weren’t made for this butch lesbian sport.

Marlo and Kenya Are New BFFs Hardened criminal Marlo Hampton is the roach of RHOA. They’ve tried to stamp her out so many times but she keeps popping up over and over again. At first, Marlo was Kandi and Phaedra’s acquaintance because they thought she would serve as an arch nemesis to NeNe, but NeNe flipped the script and became fast friends with Marlo.

Now, however, Marlo finds herself on the outs with NeNe so she pops up at Lawrence’s hair salon and happens to run into Kenya Moore, who is also a good gal pal of Miss Lawrence’s. Since Kenya is largely friend-less among her castmates, Kenya is in search of a few good friends, so she gloms onto Marlo and compliments the jailbird for being honest and authentic. What next, will Kenya call R. Kelly virtuous and kind-hearted?

Kenya should just go ahead and admit that she wants to befriend Marlo because she knows Marlo is messy and she knows it’ll make NeNe mad since Marlo was a bridesmaid in her wedding. Boom. There it is.

But we’ve gotta go through the motions, so Kenya invites Marlo to judge this casting call for bachelors for her impromptu charity event in honor of NeNe.

The (Few) Bachelors of Atlanta Flop Because Cynthia’s Bailey Agency never seems to be busy, Kenya runs over to her sorta friend and asks if she can use her space for a bachelor casting call. Since Cynthia’s not busy, she agrees. But Kenya might’ve understeimated the reach of those few tweets she sent out because only SIX men showed up to audition.

If this had been Porsha, they would’ve ripped her to shreds and made fun of her ineptitude and disorganization. But Kenya must in the producers’ good graces because they don’t go anywhere near that kind of angling. Instead, we’re treated to a cadre of guys who couldn’t even win Mr. Personality at your local community college. If Kenya’s goal is to raise money for NeNe’s “Saving Our Daughters” charity, then she’s gonna have to do better than these D-grade bachelors.

Thankfully, come event night, Marlo apparently has pulled a few strings and staffed Kenya’s event with a bunch of “fine” men. Marlo herself can’t be there but the fact that she was able to coordinate the arrival of a pack of man candy makes you wonder if she some kind of high-flying madam.

NeNe Shows Up and Shows Out at Kenya’s Event So here’s the catch: This whole charity event that Kenya is staging is all about making NeNe look bad. In a masterful Machiavellian move, Kenya decides that fighting fire with fire with NeNe doesn’t work. So instead, she opts to manipulate NeNe into self destructing.

It all started with the apology at the derby, which Kenya made to the girls, so that they would see her as reasonable and contrite. She then planned a charity event in NeNe’s HONOR as a way of smoothing things over. “Charity” is the ultimate safeword in “Housewives” universe and that usually means castmates are supposed to put any bad blood aside and help those who are less fortunate than them.

Kenya crafts a plan to invite NeNe, but not invite her directly. She starts off by sending her an evite, which lets her know when the evite has been opened. Kenya never bothers to pick up the phone and call NeNe though and she knows that if she doesn’t call NeNe, NeNe won’t call her. Instead of picking up the phone and questioning Kenya about this party in her honor once she catches wind of it, NeNe feigns ignorance and acts like she wasn’t invited at all when she sits down to chat with Cynthia in Mary J. Blige lacefront wig. She even lies and says she never received an evite. Unfortunately, Kenya has a read receipt that says otherwise so NeNe will have to try better spin than that.

Cynthia tries to get past the invite issue and asks NeNe if she’ll be attending, but NeNe remains as stubborn as ever and insists she won’t be there unless Kenya reaches out to her.

Well, Cynthia ends up blowing up NeNe’s phone, begging her to show up. And Kenya sends her a text message. Cynthia’s pleading finally breaks the levy and in burst NeNe Leakes looking like bedazzled refrigerator with Mufasa’s mane glued on top. NeNe is there physically but she ain’t there for it mentally. She has a stank face from the moment she walks in and it only gets worse Kenya calls on NeNe impromptu to give a speech to everyone at the party. GOT-CHA!

Realizing she’s been set up, NeNe digs her heels in and takes her time in approaching the mic. It takes so long that Kenya has to ask NeNe to step up to the mic twice. While most people try to put on airs and keep squabbles out of the public eye, NeNe aggressively snatches the mic from Kenya and comments that she didn’t know she had so many “good friends.” NeNe then thanks her charity and drops the mic. That’s it. No small talk, no words of inspiration, nothing.

Everyone at the party is awestruck by the audacity of NeNe to blow off her own charity and to insult the host of the party.

Victory #2. Kenya has succeeded in getting NeNe to expose her own toxic behavior and guess what? It makes Peter sick to his stomach. For some reason, NeNe insults Peter in her confessional interviews as being a “bitch ass” for getting involved in so-called women’s affairs. But when her pal Christopher Williams intervened in his wife’s arguments with Kenya, THAT was okay? Bye, Nene.

Meanwhile, back at the charity event, Kenya looks gracious, elegant and poised as ever as she networks and raises money for charity while NeNe looks shallow, flustered and petty as ever for stomping off and disrespecting everyone involved.

NeNe tried to set Kenya up to be embarrassed at that pillow talk event and instead, Kenya beat her at her own game later.