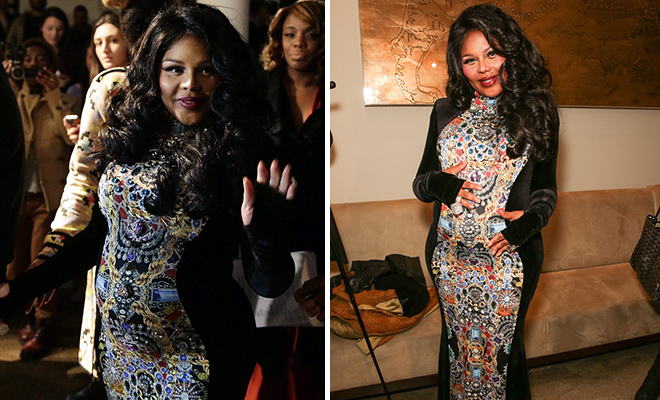 There’s a new celebrity mom in town, and her name is Lil Kim. Kim and her growing baby bump were photographed at The Blondes fashion show for NYFW, where she was spotted seated in the front row beside Paris Hilton, and later, she took to the stage during the after-party to announce her pregnancy.

“I’m a mom, but I can turn it up a little!” the Brooklyn rapper reportedly said as she rubbed her belly.

According to MTV, celebrity bloggers Perez Hilton and Karen Civil were the first to break the news and they both shared two photos of the mommy-to-be, who will celebrate her 40th birthday this July.

Mommy to be Lil Kim at fashion week. pic.twitter.com/OD8nUTs6Qm

“Me and a very PREGNANT #LilKim at #TheBlonds show. Congrats, boo!!! #NYFW” Perez wrote in his caption.

Lil Kim confirmed her pregnancy news to US Weekly this morning. “I’m so excited! I’m a few months along, I can’t wait to be a mom!” she exclaimed.

Before performing “Lighters Up,” Kim paid tribute to the late Notorious B.I.G. She told the crowd, “It’s also going to be Biggie’s birthday and the anniversary of his death soon so we [as she points to her belly] love you.”

Kim wouldn’t say how far along she is, and according to US, she has chosen to keep the identity of her unborn baby’s father private for now.

Lil Kim had been in a public relationship with an aspiring rapper from New York named “Mr. Papers,” but they broke up sometime in 2012, though he could very well still be her baby daddy. Guess we’ll just have to wait and find out…

Congrats to Kim on the exciting news!